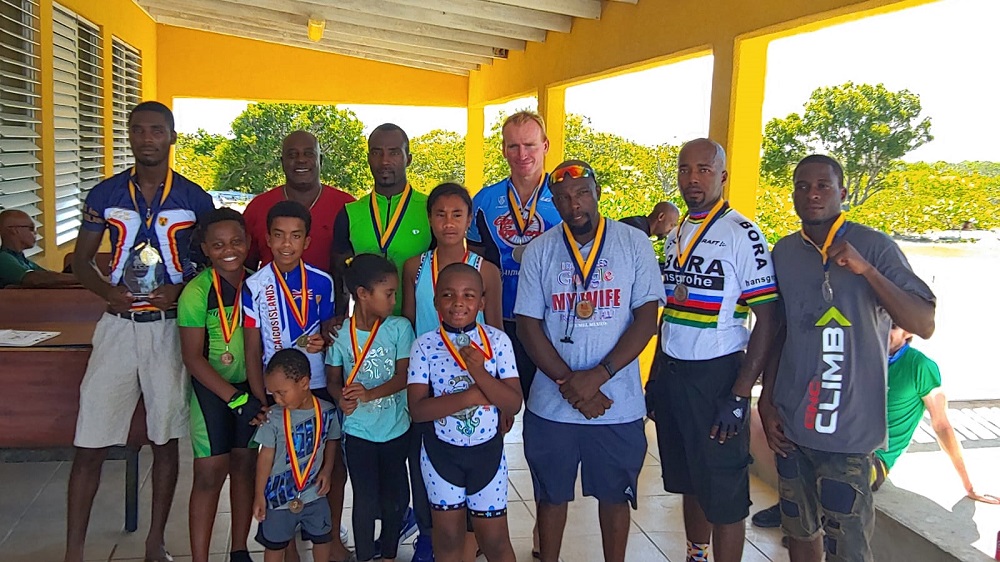 North & Middle Caicos, August 16, 2019 – TCI – Tyrone Bishop named Champion of the North and Middle Caicos Glory Of the Green championship for the second year in a row.

Cyclists, over three categories Masters (66 miles), Elite (66 miles) and Cadets: (6 miles) competed in the second annual Glory of the Green Championship of North and Middle Caicos.

The 66-mile race began at 10:50am with 12 participants, departing Miss B’s in North Caicos headed to Sandy Point. The route went through the town of Sandy point before headed back towards Bottle Creek and onto Middle Caicos. After passing the causeway and entering into Middle Caicos we lost our first cyclist Mr Devaugh Williams who suffered severe cramping in his legs and lower back and was forced to drop out of his race.

Further into Middle Caicos, approaching Lorimers, we lost our second rider Mr. Sean Rodgers who succumbed to nausea. After circling at Lorimers dock and headed back to the final stretch the race took a horrific turn when Fred Registre’s front wheel tapped Shanwell Gardiner’s back wheel causing a heart wrenching crash that ended the race for Fred. Thankfully, Mr. Registre sustained no major injuries.

The race saw constant attacks by Tyrone and also Sean, with Dan doing his characteristic long hard pulls that eventually reduced the peleton to a few riders. On the final leg out of Middle Caicos, Tyrone suffered severe cramping and was forced to stop temporarily. He was however able to remedy his condition and was able to chase down the last two remaining in the lead pack (Shanwell and Dan).

The honour of being named the Champion of North and Middle Caicos came down to a photo/video finish. After careful review of the footage, Tyrone (from the elite category) was determined to be the overall winner, scarcely beating Shanwell Gardiner (from the Masters Category) for the title.

In addition to being the 2019 Champion of North and Middle Caicos, Tyrone was also first place in the Elite category followed by Earldarrel Basden in second and Omard Gardiner in third. Shanwell Gardiner who was second overall, was first in the Masters category, with Daniel Redmond in second and Kavin Ewing in third.

Speaking on his win Tyrone said: This season has been my strongest and most consistent performance in my cycling career. The 2nd annual Glory of the Green was one of my most challenging, humbling and rewarding wins. After feeling so strong in the beginning I endured cramps on the drive home and after being dropped 6 miles behind by the leading competitors I really thought the race was over for me. But then I heard the voice of my wife and supporting friends motivating me to push through. This gave me the drive to not only catch up to my competitors or complete the race but to capture the win.

It was the most thrilling win out of all of my wins for the season because it was a very close victory and one that I was able to attain after a relentless comeback. Now I truly understand when it says the race is not for the swift but to he who endures to the end. For the upcoming tour, I plan to continue the same training strategies and improve weak areas. I am looking forward to a great competition and testing new limits. Blink and you miss it.

TCCF President Shanwell Gardiner stated that its been a exciting season so far both locally and Regionally. The Cyclist has been committed to training and elevating the Sport within the TCI. We are grateful to our sponsors for investing in the TCCF and making it possible for us to host these events to further promote Cycling in the TCI.

A time trial and the Youth Day Kids Championship are up next for the TCCF in September; All leading to the ultimate championship, The Second Annual Tour of the Turks and Caicos in October. The tour will include 5 stages over 4 islands. Stage 1 in Grand Turk on October 5th, stage 2 & 3 in North and Middle Caicos on October 6 and 7 and the final 2 stages in Providenciales on October 12th and 13th .

The Turks and Caicos Cycling Federation wishes to thank our sponsors of the Glory Of the Green: Jaca TCI, Core Resources the spectators for supporting the event, the Royal Turks and Caicos Police Force who kept us safe during the event, and the race committee and volunteers who assisted in making this event a success.