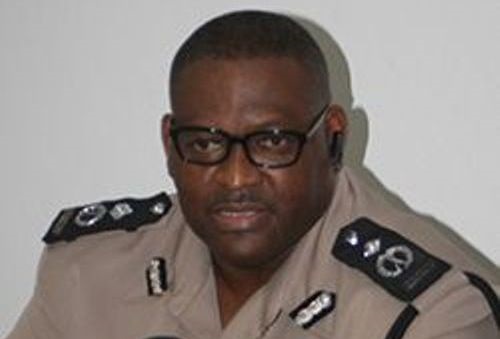 “While it is my intention to make this appointment ‘substantive’, for the moment I intend the rank to be ‘acting’,” said Governor Nigel Dakin at the ceremony where he announced the individual who would take on the role of deputy commissioner of police. His Excellency added, “While I understand it was not a popular comment, I do believe it was a wise comment, made by the outgoing Commissioner that our officers need as much international exposure – or at least as much cross-government exposure – as they can get if they are to really deliver in the top jobs. I also agree with the present Commissioner, who recommended Mr. Adams, that we have not done well in investing in our officers to give them this opportunity.”

In announcing his choice, Governor Nigel Dakin explained his decision to those in attendance at the Grand Turk Police station where the ‘reveal’ was made, “You will also appreciate that with my focus on crime, border protection and human trafficking, and with the way these issues are at the top, or near the top, of the public agenda, my first priority is to appoint the very best man or woman I can find to the job. I am a strong believer in meritocracy, I dislike any sense of entitlement, and if there is a competition for a job, the best candidate will always, under my watch, secure the role.”

The Governor continued, “So, our new Deputy Commissioner will be invested in, on the prestigious Police Command Course, run in the UK. This course is mandatory for UK Police Officers advancement to the highest ranks. It’s a tough course, but it’s also a course that develops an officer and will give Mr. Adams tremendous exposure to national policing and national security leadership – including exposure at Ministerial level – in the UK. Mr. Adams’s permanent appointment will be subject to passing that course.”

The governor stated that it is important for a Commissioner and Deputy to have an amicable relationship, and likened the role of the DCP to a conductor aimed at delivering a symphony.

“… it’s the Deputy Commissioner who runs the daily operations of the force making those decisions that impact right here, and right now, on the safety of our citizens. If you are operational by nature this is the dream job. This is the appointment that, when done well, is the conductor of an operational orchestra. As Governor, it’s therefore an extremely important appointment for me to get right. The best job I can do for the Islands is to place the best person I can find into the role.”