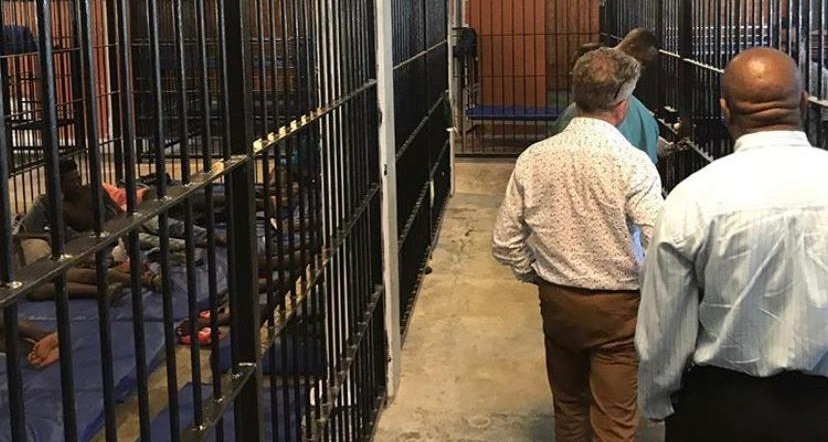 #Providenciales, August 14, 2019 – Turks and Caicos – It takes the new TCI Governor to give the public access and insight into the detention center at South Dock road where a new group of Haitian migrants took up residence on Monday, following a successful interception.

In another of his regular reports at Instagram, His Excellency Nigel Dakin gives imagery to his visit of the site in Providenciales and speaks about what interpreters told him some of the most recent human smuggling victims had to say about their life in Haiti.

The Governor penned: “They describe their existence in Haiti as sub-human.  I don’t doubt it.  Some described their crossing as terrifying, forgetting the nausea and rough seas there was a fear of being thrown overboard if the ship risked capsize to reduce chronic overloading.  They knew the waters were patrolled by sharks.”

The empathy for the group, whom he assured would be repatriated to Haiti within three days, did not sway the fact that the attempt at an illegal entry is a violation, not to be tolerated.

“I didn’t need to say it because at this point in their sad journey, they knew it – but I said it anyway – that they had paid criminals to, at best, place them in captivity – preventing them from  legally migrating – and at worst, they’d put their lives in serious jeopardy while selling themselves into a life of exploitation.  They’d basically been had, by conmen.”

The Governor told the illegal migrants that he saw them as victims and shared, “…the mistake they’d made was to take their chance making criminals wealthy on the back of their desperation.  They nodded.  They said they’d take this message back to Haiti.”

The mission, explained the governor is to get to the root of this issue of smuggling and the Instagram post informed that the National Security Strategy will focus on the people on the sloops as well as the facilitators, captains, money flows and the people in the Turks and Caicos Islands who “generate the pull factors here including employment.”

The latest group included 40 males and 12 females; mostly men in their twenties said the governor and some of the females were as young as 15 years old and many had left their children back in Haiti to make the voyage.

There was thanks to the staff at the South Dock Road Detention Center; their jobs characterized as “super emotional issue, super stressful, super important.  I found them strong of purpose and human in approach.”