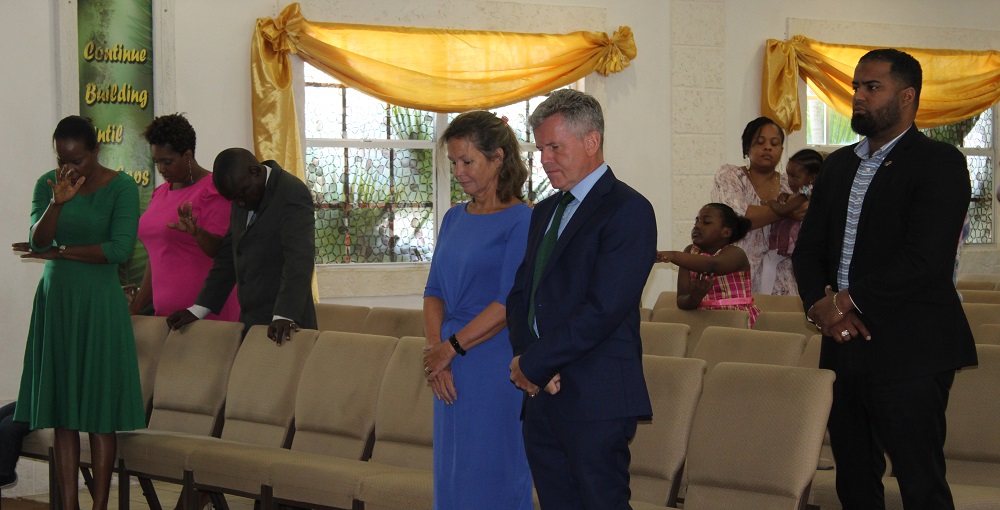 The Members of Community Fellowship Centre, its Pastor Bradley Handfield and his wife Minister Rachel Handfield were described as “welcoming” by the Governor who later in the day posted photos and comments at Instagram, on his experience at the Bight area church.

In a message, drawn from the Bible book of Daniel, Reverend Handfield challenged the congregation to steadfastly hold onto their kingdom character, even in the midst of worldly pressures including their jobs.

A message fit for a Governor or any Believer who may find they are tested to conform in order to fit in.

It was an outstanding sermon about standing out, as did Daniel, a Hebrew man who remained respectful of the culture and authority of his captors while maintaining an unbreakable bond with God.

“Daniel’s life is indicative of the clash between serving culture and serving God,” said Pastor Handfield who labelled his message: ‘Daniel did something with his Faith.’

“Believers should operate at a higher standard… success is when God is glorified above all else.”

Three areas were cited for excellence; health, education and being top performer on the job or at anything you decide to do.

“Don’t be so heavenly-minded that you become of no earthly use,” warned the preacher.

Governor Dakin cheerfully addressed the congregation, noting that the day actually marked his first month in the Turks and Caicos.

His Excellency expressed resoluteness in accomplishing his goals,  gratitude for the warm welcomes he has been receiving across the country and drew laughs when he said he should be the envy of all governors, as the Turks and Caicos is the best overseas territory.

Pastor Bradley, with agreement from the Governor, led his congregation in a prayer of covering and success for His Excellency and his family.

After church, pose with Governor selfies, one on one conversations, hugs and handshakes followed as members joined their pastor in ensuring the love of God was demonstrated toward the couple.