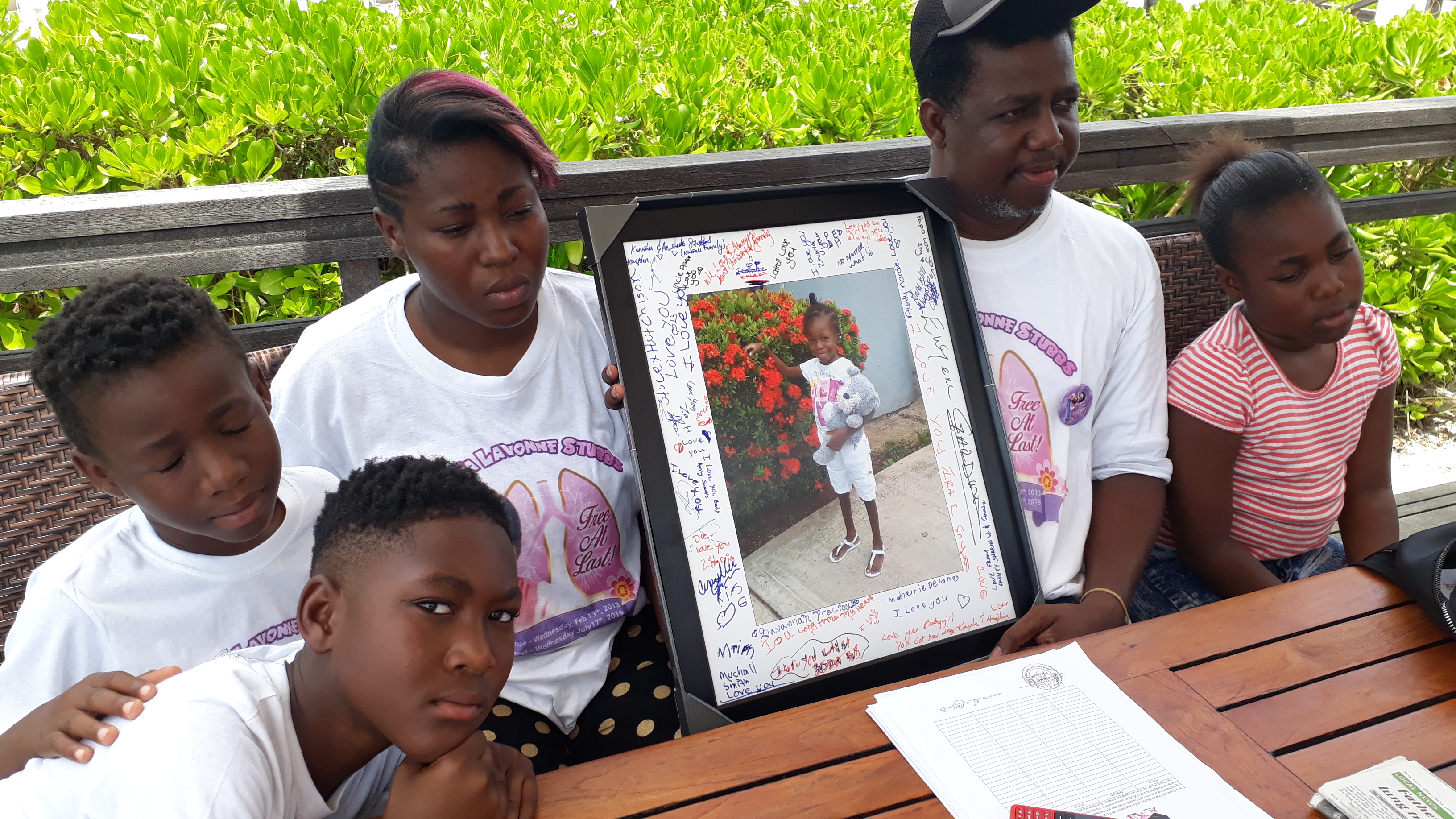 #Providenciales, August 28, 2019 – Turks and Caicos – A Turks and Caicos family today, tearfully shared their traumatic experience of trying to get medical care for their young daughter, who was diagnosed with lung cancer after being moved from hospital to hospital and who tragically died on July 17; now, that family just wants Zharyia Lavonne to be flown home from England.

Even the return of six-year-old Zharyia Stubbs to the Turks and Caicos Islands has reportedly been botched by those whom the family entrusted with the process.

The funeral home in the United Kingdom and the National Health Insurance Board in the TCI had all of the requisite documents, media was told, three weeks before the funeral date.  Still there was a confusion that led to a delay which resulted in the child missing her own funeral, which was to be held this past Saturday August 24, 2019 at Jericho Baptist Church.

Ira Stubbs is Zharyia’s father and he explained that both he and his wife, Zshanai have been contributors to the National Health Insurance Plan for years and yet, when the time came for urgent, life-saving medical care for their youngest child, the system failed miserably.  Mr. Stubbs said he felt abandoned and that the string of letdowns caused his daughter her life.

Zharyia began visiting the hospital for respiratory problems when she was just three-years-old.  Mr. Stubbs said he suspected her problem to be asthma as the family has a long history of the condition.  However, according to diagnoses, her condition was not asthma and eventually Zharyia was flown to Doctors’ Hospital in Nassau, Bahamas.

Mr. Stubbs said he was satisfied with the treatment there.

Zharyia was healthier after her time at hospital in Nassau and the referral by Doctors’ Hospital for further medical attention was to a respiratory specialist.

The family explained that with no lung specialist at Doctors’ Hospital and none in the Turks and Caicos, arrangements were made by the National Health Insurance Plan for the child to see the recommended specialist in the Dominican Republic.  In the DR, the service was described as terrible; there was a language barrier and there was no translator to help the family transition.

Mr. Stubbs also accused the health practitioners in the Dominican Republic of being corrupt in some instances and, he reported that they gave his child subpar medical care.  Suspected errors in Zharyia’s treatment, including medication with which her father did not agree all worked to cause his daughter’s condition to worsen, believes Ira Stubbs.

In the Dominican Republic was where Zharyia received the diagnosis of Stage 4 lung cancer.

Father, mother and three siblings told the story and responded to questions in a press conference held this morning at Hemmingway’s Restaurant at the Sands at Grace Bay in Providenciales.  The family was given a week’s accommodation at the Sands by the Hartlings as help in this time of desperate need.

Funds, said Mr Stubbs, are depleted and now he plans to wait for Zharyia to be transported home and then it will be back to the United Kingdom, to get his three other young children settled into school.

In Canada, care was really good, Mr. Stubbs said.  Zharyia was airlifted to Toronto from the Dominican Republic due to her father’s relentlessness in getting help.  That pursuit took him to the Premier and Finance Minister, Sharlene Robinson who intervened and got approval for Zharyia and both her parents to be medically evacuated to a children’s hospital in Toronto.

Again, there was a hitch when only one parent was allowed to go and when it took one week before the medical team from Canada could stabilize Zharyia in order for her to travel.  There had been questions, said Mr. Stubbs, about the quality of care for Zharyia in the DR by the Canadian medics.

Help for the child was good in at the children’s hospital but it was also limited.  A lung transplant was seen as the only way Zharyia would survive and go on to live a healthy, normal life.

Again, her father Ira Stubbs, began working.  Dropping off sponsor letters and writing to people and telling his story to media all in the hopes that it would help to raise the profile of the case and raise the $320,000 necessary for the transplant.

Once again, it meant a move for the now, five-year-old little girl who her father said was in excruciating pain.  Her trip home to Providenciales, said Ira Stubbs, was meant to be a maximum 30-days.  Instead it was three months and hindered, reported the family by an unwillingness for the child’s ‘soon to expire’ TCI passport to be fast-tracked or for other arrangements to be made, so that she could travel for medical care.

According to Mr. Stubbs, his daughter picked up on the delays and the frustrations and asked, at one point, ‘why did they do this to me, please continue fighting!’

Those were the moments in the press conference when both mother and father were awash in tears, long pauses by her father to quell the crying and all of the family members at the table were donning t-shirts featuring a radiant portrait of Zharyia; bright eyes and big smile.

“I feel they abandoned us and a vulnerable child,” said Mr. Stubbs.

Eventually, Zharyia made it to further care in the United Kingdom but there too, the Stubbs family felt abandoned by the Turks and Caicos Islands government and the National Health Insurance Plan.

For 30-days the family lived out of a car.  Immigration issues forced a marriage between mother and father in order to bring swift resolve and that flash wedding was said to have taken place at the hospital according to Mr. Stubbs.

By now Zharyia, who wanted to becoming a doctor was surviving with the help of a ventilator and soon it was clear that money and the transplant were not coming.

Zharyia died on Wednesday July 17, 2019 at 7pm at the Great Ormand Street Hospital for Children (GOSH) in the UK.

Medical records, request for a new consultant and the autopsy after Zharyia’s death were all met with little to no response from GOSH, said Mr. Stubbs, who also expressed his disdain for the hospital in London.

“We reported in emails, the mental and physical abuse to NHIP,” but we got no support from NHIP.

It was a complicated story, laced with strong charges and the overwhelming distress of the loss of a child.  The family has also received no counselling and feels out of options.

Mr. Stubbs said he wants his daughter home as promised.  Mr. Stubbs said he also needs financial help to get back on his feet and believes $5,000 is sufficient to pay the penalty on airline tickets and get the family re-settled in the UK.

There was another request to the public for that financial assistance.

Magnetic Media has contacted the National Health Insurance Board; Public Relations executive Joddy Harvey has been responsive and promised there would be some communication on this complex and distressing matter.