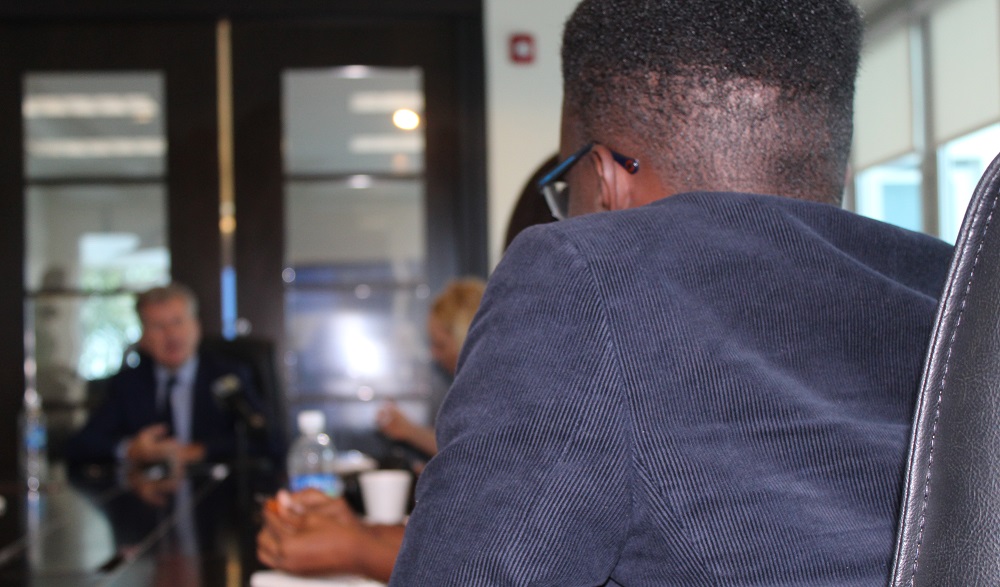 #Providenciales, August 2, 2019 – Turks and Caicos – The new governor of the Turks and Caicos Islands is already defying the status quo as far as what residents of these islands have come to expect of Her Majesty’s representative within the territory.

While it is true, Governor Nigel Dakin, has embraced the traditions of becoming governor and has studied what it requires in his constitutional role of governor; His Excellency is more the exception than the rule when it comes to how he will actually execute.

We are told stories of a man who is, after only two and a half weeks on the job, considered legendary in his approach to nagging pressure points within the Turks and Caicos.  Yet there is nothing cavalier about his dealings.  Governor Dakin is described as sincere.

Some are cautiously optimistic as they begin to speak about the man but the kudos become less and less guarded and from the commentary emerges something quite uncommon for many islanders… hope.

A governor who invites a soon-to-be, ex-inmate to pay him a visit at his office for a ‘heart to heart’ talk about a future free of a life of crime tends to make a strong impression.

You could see it was captivating; the conversation being had between the governor and several inmates at the prison as they sat around a table.  The group of men appeared to be taking notes and were seemingly engrossed in a talk, which Magnetic Media is told, was ‘real and productive’.

There was a true desire to know the challenges, to get to the bottom of the problems and an honesty about what is expected of everyone who lives and works at the beleaguered correctional facility.

Even the former ‘hunger-strike’ protestor was invited and heard.

Never has a governor or recent leader of the country held this sort of forum with inmates at Her Majesty’s Prison, we are informed.  But if the letters, authored by inmates to country leaders and given to Governor Nigel Dakin arrive safely at their destination and if the messages contained within those letters are given consideration, then perhaps there will be a change in that trend and a change at the HMP.

The Governor is married to an island girl and media, in a candid conference with His Excellency, had a chance to meet Barbados-born, Amanda Dakin.  Already, Mrs. Dakin is assiduously working as an environmental volunteer and she has now visited four islands within the TCI archipelago since her husband took office.

The meeting, held at the Governor’s Office in Providenciales on Wednesday July 31, 2019 went overtime and was excellent. Attendees, representing six media enterprises embraced the idea of there being more sessions to come and regularly.

Magnetic Media learned a lot including that His Excellency is a man who wants to set a positive tone during his time in Turks and Caicos.  Mr. Dakin is also a man who is not fearful of possible failure or fallout as he believes his big picture story will leave a lasting impression.  The new governor, from what we gathered in that meeting, believes in data driven decisions; strategy on areas of the most importance, is firm that one must go toward problems in order to solve them and is methodical in his understanding of how to work with the people, connect with the people and to celebrate people.

Nigel, the abnormal is already making history in his story as the new governor and from where I sit as an enthusiastic citizen and resident of the Turks and Caicos Islands; I look forward to the next chapter and a happy ending.