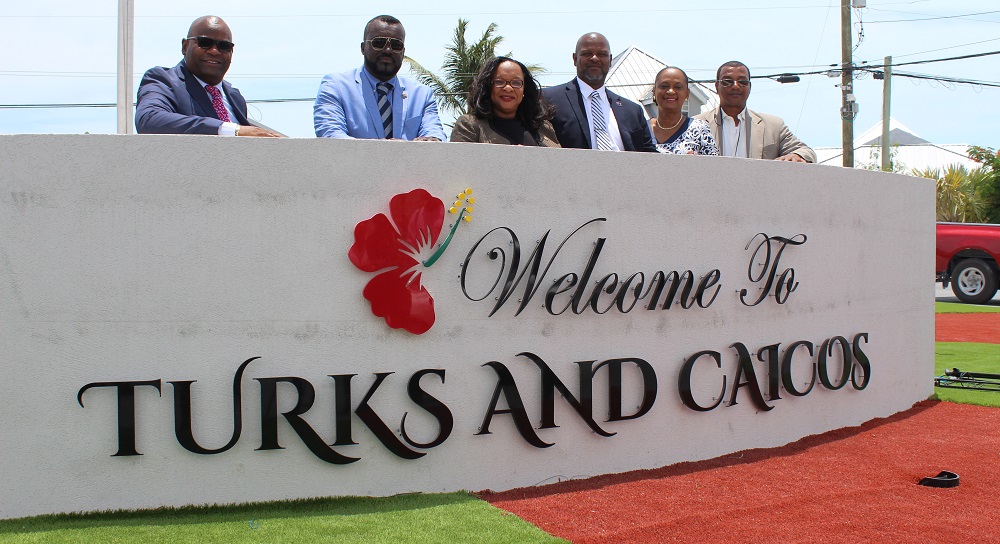 #Providenciales, August 7, 2019 – Turks and Caicos – An investment of $70,000 was made for the dramatic make-over of the new and improved welcome roundabout in Providenciales on Airport Road; it was unveiled on Tuesday as a joint project of the Office of the Premier and the Ministry of Infrastructure, Housing and Planning.

“There are additions coming and there will be monuments.  We may decide to put a replica sailboat in the Blue Hills roundabout to represent the culture of that community, for example, and these are the concepts we are going over to figure out what is best and it is also in partnership with ‘Adopt a Roundabout ‘program and the ‘Adopt a Highway’ program that we are entering into with the private sector and so this is just the beginning,” said Infrastructure Minister, Sean Astwood, Deputy Premier.

In a design which now sends three distinct messages to the motoring, visiting public the mural is gone and is replaced with a refined, simple salutation as the main greeting sign, created by Pelican Designs.

“Each roundabout will have a different theme and we reflect it in the design.  We wanted to use fonts that were a bit different from what everyone is used to seeing; away from the generic thing.  It is more of a pirate-type font and the idea is to keep it clean, simple, easy for people catch the concept and more importantly, if you were to put a picture of what it used to look like before and compare it to what it is now. You would see a big change and a serious transformation and it brings to life the idea of really redeveloping downtown.”

The reveal was well attended by local media and captured Premier Sharlene Robinson and five of her ministers excitedly unveiling the three signs.

“This is the start of the redevelopment of the down town area and we are collectively looking at an ‘Adopt a Roundabout’ and an ‘Adopt a Highway’ road beautification project that is launched here in Providenciales and then we will move on to Grand Turk and to the other islands,” said the Premier who unveiled the ‘Welcome to Turks and Caicos’ sign.

Infrastructure Minister Sean Astwood, who has already a made similar facelift in his constituency of Five Cays, explained there is now increased momentum for the remainder of the downtown redevelopment project which next goes to the Blue Hills or Fuller Walkin roundabout.

“What my ministry is looking to do now is a full redevelopment plan of down town and that includes, current, existing buildings to do different facelifts.”

Deputy Premier Astwood added, “The next project is likely to be the Blue Hills roundabout.  We are actually going to be erecting monuments and the first will be a full life size statue of (Most Excellent) JAGS McCartney and the first will actually be done at Crab Tree Corner (Grand Turk).  There will be a statue of JAGS in every island in the country.”

The improved aesthetics is a beginning said DP Astwood; who shared that the plan for all of the islands is to raise patriotism by raising the profile of the country’s national hero.

Turks Head cacti, cracked rock, a towering flag pole topped with the TCI flag and green and cranberry-red-coloured, weather-resistant turf add to the design and are a tribute to the indigenous cactus and national symbols.

Premier Robinson explained, “So we wanted to display a little culture as the tourists enter the main gateway here in Providenciales to Turks and Caicos.  It is going to be the start of something bigger with our further ‘Adopt a Roundabout’ and Leeward Highway will be a part of the ‘Adopt a Highway’ programme.”