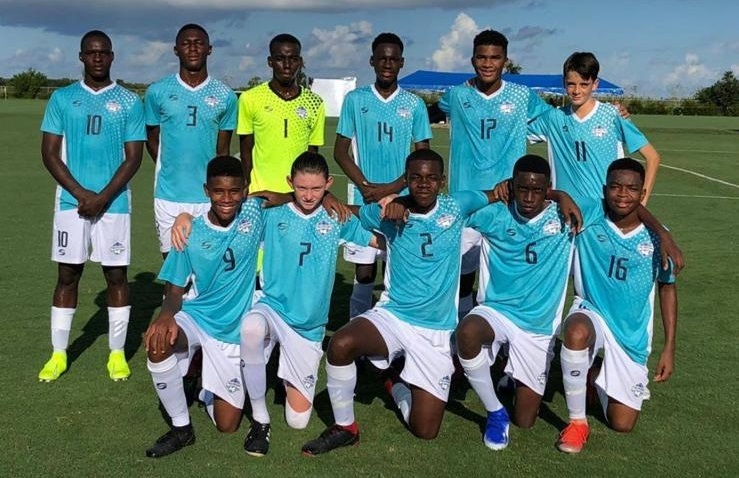 #Providenciales, August 7, 2019 – Turks and Caicos – Monday was a better day than Tuesday for the U15 boys’ team of the TCIFA, thanks to a defining performance on the soccer pitch which made history for the Turks and Caicos Islands.

It was the first time that any youth team – male or female – had secured a victory for the Turks and Caicos Islands.

“Dale Taylor scored the first goal of the game and the tournament for TCI; with assist from Corey Williams,” said TCIFA Coach, Andrew Edwards.

A long-range volley was the next score for team Turks and Caicos; Watson Jean-Louise took the score up a notch, 2-0.

“Corey Williams with a near post header from Callum Park corner, made it 3-1 TCI at full time.”

Mr. Edwards wrote: “We are all very proud and look forward to getting many more similar results.”

The Turks and Caicos Sports Department added, “”Turks and Caicos Islands was impressive as well in posting a 3-1 win against Saint Martin, with Dale Taylor (10’), Watson Jean-louis (19’) and Cory Williams (70+4’) all finding the back of the net.”

Today, the U15 team took on Dominica.  The boys managed one point, while Dominica scored three goals to win the match.

TCFIFA President, Sonia Fulford was thrilled and on Facebook wrote, “Well done to the squad and Coaches!”

The TCIFA U15 boys left on August 2, 2019 for the Concacaf Championship being held in Badenton, Florida.  So far, the team has played Monserrat, St. Martin and Dominica.

Next game is 11 a.m. TODAY (Wednesday August 7) and it is aired live on Concacaf Facebook; TCI U15 boys take on the British Virgin Islands.