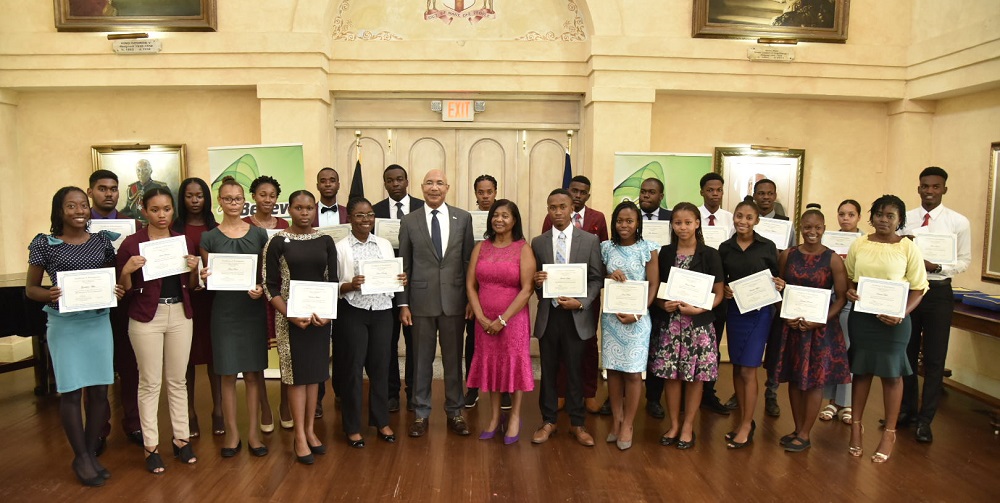 #Kingston, August 22, 2019 – Jamaica – Twenty-four students have been awarded scholarships, funds for tuition and grants valued at approximately $17 million from the Governor-General, His Excellency the Most Hon. Sir Patrick Allen, and sponsors of the seventh Summer of Service Programme.

This forms part of the Governor-General’s I Believe Initiative (IBI), where exceptional students with dire financial need, who are matriculating to colleges and/or universities for their first year of undergraduate study, and those currently completing their first year to begin their second in 2019, are awarded.  The funds were formally awarded to the students at King’s House on Tuesday (August 20).

In 2011, Their Excellencies, the Governor-General and Lady Allen launched the IBI.  The Summer of Service Programme, which is an activity of the IBI, was also launched that year, and began on the premise that the children are the future of the nation.

Seventy-three students have so far benefited, including 12 recipients last year, who received a total of $10 million.

While encouraging the students to continue their path of excellence, the Governor-General reflected on students who were previously a part of the programme, and are now international scholars.

“I cannot resist sharing with you some astounding success of the programme. Two of our IBI Ambassadors, Abrahim Simmonds and Tishauna Mullings, who were Summer of Service recipients, have graduated from the UWI, Mona. They are among this year’s recipients of Chevening Scholarships to the United Kingdom to read for their Master’s Degree. Another IBI Ambassador, Chevano Baker, who obtained a Master’s degree through Chevening, has also won a Rhodes Scholarship to Oxford University and starts school in October this year to do further studies. These success stories are very heart-warming,” the Governor-General said.

He also encouraged the awardees to continue striving for greatness. “I encourage you to maintain a high standard of work in your tertiary studies and throughout the rest of your lives,” he said.

One reason behind the selection of these awardees is that they have all voluntarily completed meaningful projects in the parishes of St. Elizabeth, Westmoreland, St. James, Clarendon, St. Catherine, St. Andrew and Portland.

The projects included creating diverse activities for children in State-operated homes, as well as homes for the physically and mentally challenged, and the elderly; coordinating and soliciting funds totalling approximately $700,000 to cover camp expenses for 50 young people in volatile areas; hosting Mathematics upliftment summer classes for children; mentoring and teaching primary school children; providing back-to-school supplies for children, and engaging in numerous other projects to support disabled and homeless individuals, such as feeding them and providing clothes.

Header: Governor-General, His Excellency the Most Hon. Sir Patrick Allen, and Lady Allen (centre), with the Governor-General’s Summer of Service Programme Awardees for 2019 at King’s House on Tuesday (August 20).