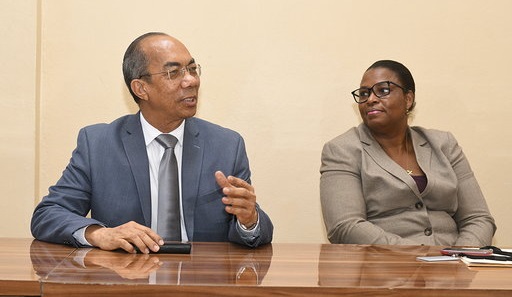 #Kingston, July 5, 2019 – Jamaica – The Ministry of National Security is to acquire software and associated equipment for a DNA database, at a cost of US$450,000, this financial year.

This was announced by Minister of National Security, Hon. Dr. Horace Chang, during a tour of the Institute of Forensic Science & Legal Medicine (IFSLM) in Kingston, on Wednesday, July 3.

Dr. Chang said the various upgrades, such as acquisition of the DNA database, are in keeping with the Government’s commitment to use forensic technology in its crime-fighting efforts.

“The IFSLM is currently in the process of improving its capacity and capabilities for greater efficiency and effectiveness. This modernisation will enable the IFSLM to increase its use of DNA and other biological evidence to solve crimes, by prosecuting offenders and exonerating the innocent,” he explained.

Dr. Chang noted that as of June 2019, a total of 461 DNA samples had been submitted to the Institute for forensic investigations.

“Additionally, the JCF (Jamaica Constabulary Force) and DCS (Department of Correctional Services) detention officers submitted 476 DNA samples to populate the DNA Registry. For the first half of 2019, IFSLM conducted DNA analysis on 313 cases involving 460 exhibits and found matches in 47 per cent of the cases,” he pointed out.

Director of IFSLM, Dr. Judith Mowatt, said the database will make a profound difference in the use of DNA and other biological evidence to solve crimes.

“It will be the first time we are having a national database. In terms of technology and infrastructure, we have the latest equipment and kits. But what we don’t have is a DNA database that will create the intelligence from all of those profiles that we have generated,” she noted.

“Our DNA analysis is helping to give the police intelligence in terms of crime detection, so they will send us samples from a case that they would like us to connect to the suspect,” Dr. Mowatt explained.

Photo Caption: Minister of National Security, Hon. Dr. Horace Chang (left), speaks at a press conference, held at the Institute of Forensic Science and Legal Medicine (IFSLM), in Kingston, on Wednesday, July 3. With the Minister is Director of IFSLM, Dr Judith Mowatt.