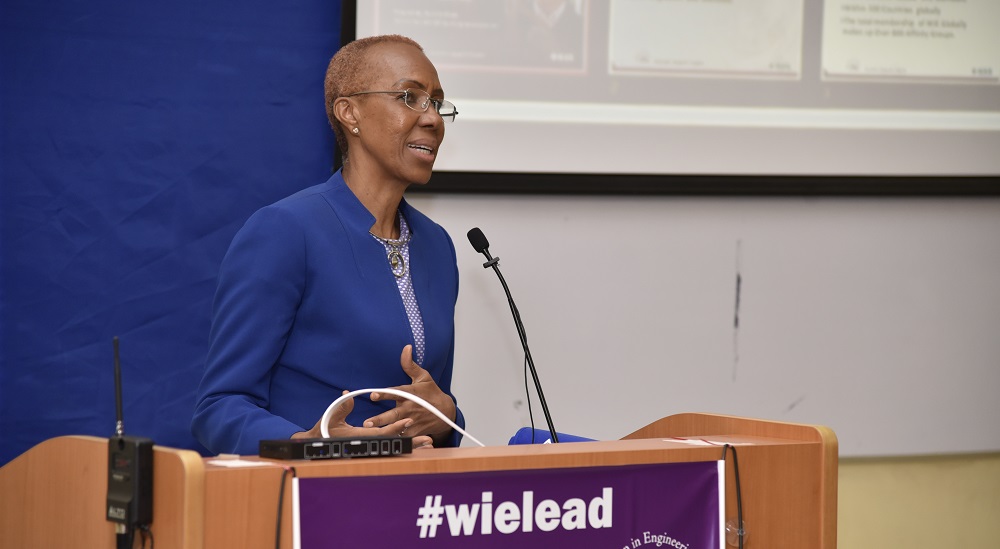 #Kingston, July 5, 2019 – Jamaica – More of the nation’s women and girls are being encouraged to pursue academic studies and careers in the areas of science, technology, engineering and mathematics (STEM).

Minister of Science, Energy and Technology, Hon. Fayval Williams, made the call  at the launch of the Institute of Electrical and Electronics Engineers (IEEE) Women in Engineering Affinity Group, at the University of Technology’s (UTech) Papine Campus in St. Andrew on July 3.  She said the Government is on a journey to transform the nation and improve the lives of citizens through science and technology.

“Along this journey, we will need engineers, software developers, scientists, cyber specialists, roboticists and a whole host of other professionals, and our women must not feel daunted to join these fields,” she said.

Mrs. Williams noted that for many years, men have outnumbered women in STEM, and in many cases, when women enter these fields the attrition rate is high.  She said the United Nations Educational, Scientific and Cultural Organization (UNESCO) has indicated that women are consistently under-represented in engineering and related fields, making up just 19 per cent of engineers in Canada, Germany and the United States.

She noted that locally, the number of females enrolled in engineering at the University of the West Indies (UWI) stood at approximately 10 per cent in 2015/16; while approximately 18 per cent were enrolled at UTech for the same period.

“We cannot afford to have distinctions between men and women, as we need both males and females in all areas of industry. In the age of the fourth industrial revolution, we can no longer afford disparities between males and females in the STEM fields, whether at the academic or the professional level,” she said.

Mrs. Williams said that the time has come to change the narrative and perception surrounding these fields, and engineering in particular.

“We must embrace diversity and inclusivity of both sexes if we are to advance as a country in the digital age.  Regardless of sex or gender, everyone can contribute greatly towards building this great nation, and thus everyone should have an equal space at the table,” she said.

“I believe that our girls and women have a strong place in engineering.  I believe that they possess tremendous knowledge that when harnessed, can contribute to building a strong Jamaica,” she added.

Photo Caption: Minister of Science, Energy and Technology, Hon. Fayval Williams addressing the launch of the Institute of Electrical and Electronics Engineers’ (IEEE) Women in Engineering Affinity Group, at the University of Technology’s (UTech) Papine Campus in St. Andrew on July 3.