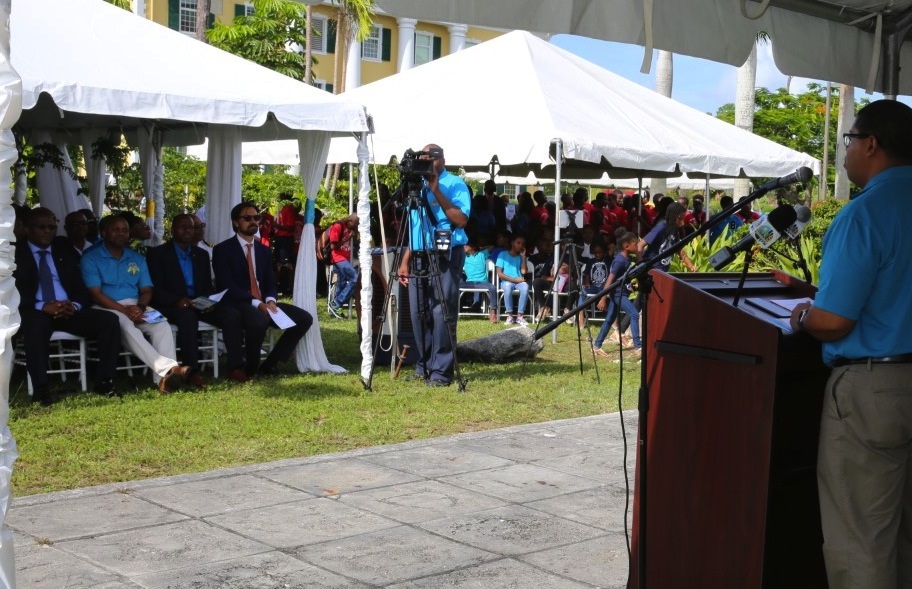 #Freeport, GB, July, 6, 2019 – Bahamas – As the country celebrates its 46th Anniversary of Independence, Acting Prime Minister the Hon. K. Peter Turnquest asked Bahamians to put aside those things that divide us, if only for this time.

Minister Turnquest was addressing the Flag Raising Ceremony on Friday, July 5, at the Harold DeGregory Complex in Freeport.

Also in attendance were Minister of Agriculture and Marine Resources, the Hon. Michael Pintard who brought Independence greetings; Minister of State in the Office of the Prime Minister, Senator the Hon. J. Kwasi Thompson; President of the Grand Bahama Christian Council, Rev. Dr. Robert Lockhart; Henry St. George of the Grand Bahama Port Authority; other senior government officials and a cross-section of the general public.

Minister Turnquest said, “If only for this week, we want to put aside those things that divide us. Our Flag represents us as a people and our aspirations. The unity, the togetherness, the strength, the resources and the resourcefulness of us as a people, and we must cherish, we must promote and we must pass on those traditions that are so unique to us.”

Minister Turnquest noted the great sacrifice given when offering oneself for frontline politics. “I can tell you, they are significant. And a lot of times, you leave in the evening wondering just what it is that I have volunteered for.  Sacrificing time, family and personal progress, even subjecting yourself to sometimes unfair criticisms… things you cannot change, the colour of your skin, where you’re from, how you speak.

“It is very unfortunate, because it is my belief that in so doing, we as a people we are holding back progress and [the benefit of] the very best talents and skills that are available to us, to push us forward and to achieve all that this country can be and all that our people deserve.”

As the nation celebrates its 46th Independence, it is his hope and prayer, he continued, that the country and people can “grow beyond where we are. Grow beyond and let go of some of the hurt, some of the disappointments that we have experienced as a people, that are holding us back.”

He said 46 years of success and growth is being celebrated, and while there is still much to be done, “there is no doubt that there is much dissatisfaction throughout the nation, and most particularly here in Grand Bahama, of where we are today and the fact that we could be so much further. I believe, however, that we have so much more to celebrate than we have to lament.”

Other events for Independence celebrations include a church service on Sunday, July 7 at 3:00 p.m. at Life Community Church in Caravel Beach and on Monday, July 8 – when the Governor General, His Excellency the Most Hon. Cornelius A. Smith; Prime Minister of The Bahamas, the Most Hon. Dr. Hubert Minnis; along with other Cabinet Ministers and senior government officials will converge on Independence Park at 8:00 p.m.

Heading: Acting Prime Minister, the Hon. K. Peter Turnquest, addressed ceremonies to mark 46th Independence Celebrations under the theme, “United We Stand Bahamas, Together We Can” on Friday, July 5, 2019 at the Harold DeGregory Complex, Freeport.

Insert: National Flag Raising Ceremonies were held in Grand Bahama, on Friday, July 5, officially kicking off the Independence celebrations.  The theme for the 46th anniversary is, “United We Stand Bahamas, Together We Can.”