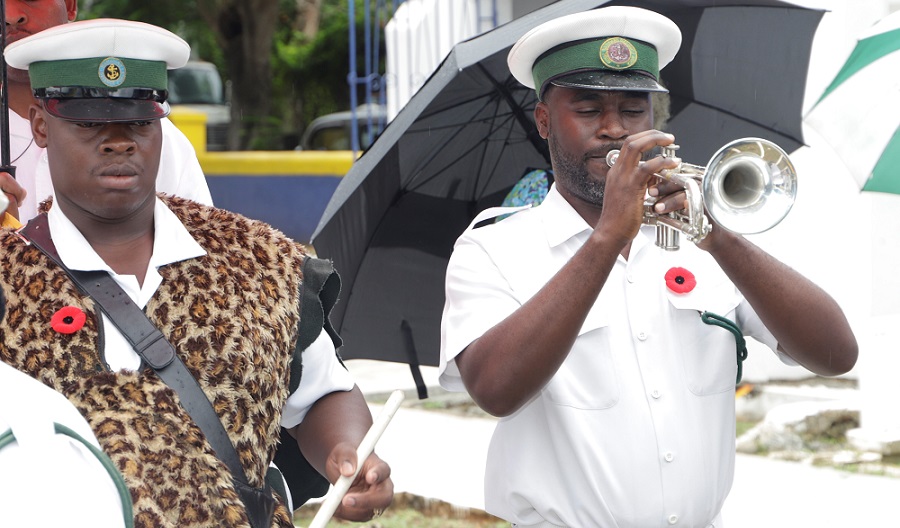 Coral Harbour Base, July 5, 2019, Bahamas – A Royal Bahamas Defence Force bugler and drummer perform the last post and reveille at the funeral service for Comrade Reuben Hamilton,  a member of the British Legion–Bahamas Branch (BLBB) who died on June 16th at the age of 94.

Comrade Reuben Hamilton was eulogized on June 28th at Our Lady’s Catholic Church, Deveaux and Young Streets. He initially joined the Royal Bahamas Police Force as a Reservist as a young man and later served served as a Military Officer in the Bahamas Battalion during the period 1942 – 1945.

During his tenure, Comrade Hamilton was given the responsibility of guarding strategic entry points and facilities on the island of New Providence, which included ports and utility buildings. He had also received additional training at the Caribbean War Headquarters in Jamaica.

Since 2012, the Royal Bahamas Defence Force has assisted the BLBB with the coordination and administration of all BLBB programmes and activities through the secondment of one of its members, Reservist Adina Munroe-Charlow, at the BLBB administrative office.

One of these activities include the performance of ceremonial duties at military funerals for BLBB members. In 2017, the Defence Force had adopted the Veterans Cemetery on Infant View Road where a number of World War I and II  veterans are interned.

The Royal Bahamas Defence Force remains committed to protecting our territorial borders while helping others.