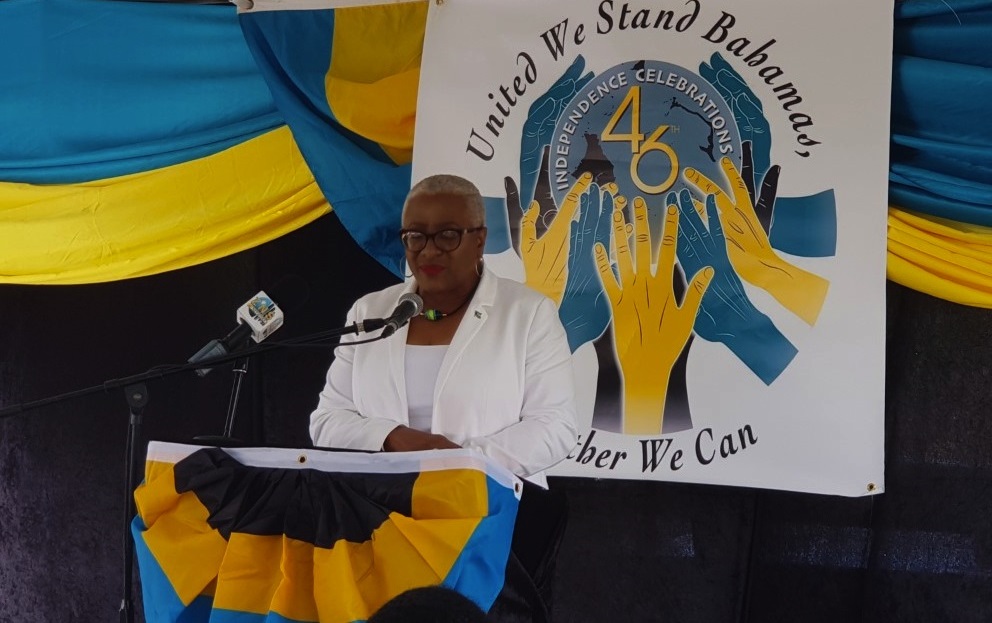 West End, GB, July 6, 2019 – Bahamas – “Whatever the true meaning of national progress may be, or by whatever measuring stick used, one thing is certain, we can only advance as a nation when people are unified with one common purpose,” said President of the Senate, Katherine Forbes-Smith.

The President’s comments came during her address at the official ceremony for National Pride Day in West End on Friday, July 5, 2019.

She noted that as individuals Bahamians all have their respective political and religious preferences and may differ on what each person’s civil rights should be, but added that one thing for sure is that as Bahamians, each will feel the effects of the success or failure of the country.

Continuing her call for unity, she said: “After winning the United States elections and becoming America’s first black President, Barack Obama said ‘to those Americans whose support I have yet to earn, I may not have won your vote tonight, but I hear your voices. I need your help and I will be your president too.’

“In essence, he was admonishing the American people that once the elections were over, it was time to move away from the everyday politics and instead lend a hand in moving America forward. I echo those sentiments for our beloved Bahamaland.

“I am home in West End, the capital of Grand Bahama, and I say we need that same civility to grow this community. We owe it to the children of this community. As I said at Mt. Olivet Baptist Church on Sunday past, as leaders our goal should be to leave this community better than we met it.”

Making reference to the ceremony many years ago in Nassau during which time the country was honouring Oscar winner Sir Sydney Poitier and naming the Paradise Island bridge in his honour, Senator Smith noted some remarks that were made by the Oscar award-winning actor.

During that event, Sir Sydney called on the young people to take The Bahamas to levels unimagined by their ancestors. He told school children gathered at the event that they were golden gifts and the future of The Bahamas.  “Sir Sydney went on to tell the students ‘you will design the country’s future. You, and the education that you will provide to the culture, to the history, to the on-going strength of the country of your birth, will also be remembered.’

“I leave that with you today.

“As July 10th approaches and we raise our Flag on this National Flag Day, let us stand together in unity, faith and hope. And remember the differences we have as a people helped us to get to where we are today.

“Those differences did not stop our forefathers from coming together in the interest of The Bahamas and a people 46 years later. As we raise our Bahamian Flag today, we do so with pride, excitement and hope in our country, which we call home – The Bahamas.”

Header: President of the Senate, Mrs. Katherine Forbes-Smith was the keynote speaker during Flag Raising Ceremonies in West End on Friday, July 5, 2019, which was a part of National Pride Day. The ceremony in West End was held simultaneously with ceremonies in Freeport, East End and Sweeting’s Cay.