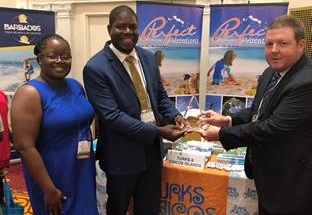 The announcement, which was made on 27 May 2019, came after months of online voting open to the thousands of subscribers of the Caribbean Journal which is one of the world’s largest websites covering Caribbean travel and tourism. Grace Bay Beach emerged as winner of the Caribbean’s Best Beach category among nominees which included Seven Mile Beach in Grand Cayman; Eagle Beach in Aruba; Pink Sand Beach in Harbour Island, The Bahamas; and Grand Anse Beach in Grenada.

Director of Tourism Ramon Andrews commented, “Grace Bay Beach has done it again! We’re excited to add yet another award to the list of accolades that our destination has accumulated over the years. This award is particularly significant because it was won by popular vote among frequent Caribbean visitors who recognized the ‘best of the best’ in Caribbean tourism. We should all be proud that our country is home is such an amazing beach and likewise take collective responsibility to protect and preserve it”.

Turks & Caicos Tourist Board representatives Ramon Andrews and Elisha Jennings were presented with the award by Alexander Britell, the Editor in Chief of Caribbean Journal, on 6 June 2019 during the Caribbean Tourism Organization’s Caribbean Week in New York.