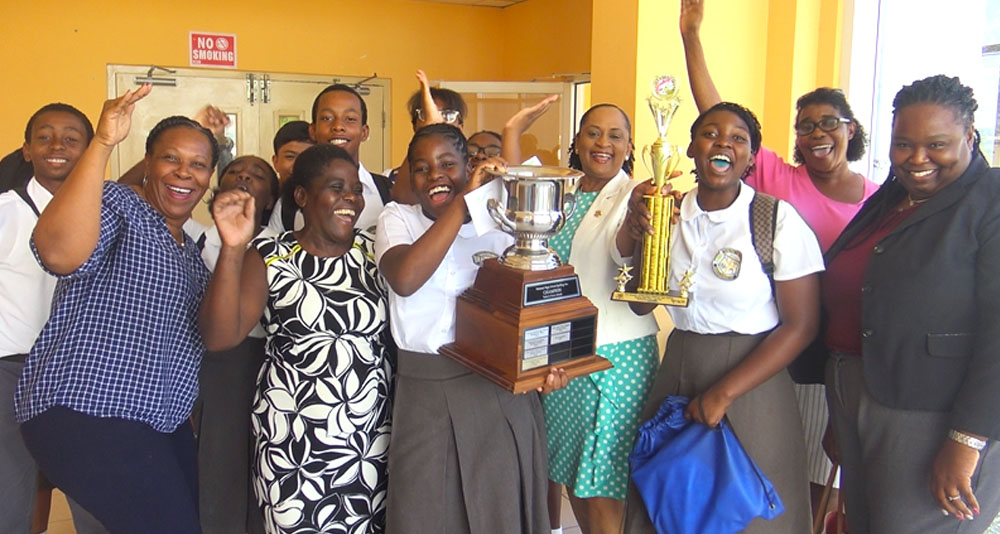 #Providenciales, June 5, 2019 – Turks and Caicos – B E A U C O U P was the winning word at the National High School Spelling Bee which went to 17 intense rounds where all 330 words in the study list were exhausted, and the home of the Hawks, Long Bay High School, could not be more thrilled with the performance of Champion Speller, Michaella Achille.

“The competition was good, but I was a little nervous at the beginning but after a while, I got confident,” 14-year old Michaella agreed that she has a good support system.  “They encourage me along the way.”

The Ministry of Education Spelling Bee returned this year after a hiatus as a result of the hurricanes and the students were ready. Education Minister Karen Malcolm opened the event held at the Gus Lightbourne Gym and she was there when Michaella was presented her prizes.

“The importance of having a competition year after year is designed to increase the students vocabulary and just for them to have a competition for them to enjoy and to just express themselves in words.” Turning to the 2019 Champion, Minister Malcolm continued with:  This young lady (Machaella Achille) was phenomenal today and I am proud of her, I wish her all the best in her future endeavors, this is her last year at Long Bay, she is moving on to Clement Howell and I expect nothing but the best out of you going forward. So, God bless you and congratulations.”

Eleven students representing schools across the country were sharply dressed and gave stand out showing in the 2019 staging of the Spelling Bee, which was started in 1998.

“Today was really exciting, we had eleven schools which participated and I was just so excited that the students were able to spell of the words that were in the spelling booklet that was provided to them an shortly thereafter they had words which they didn’t get and they did an excellent job.

Michaella’s coach and Spanish teacher at LBHS, Beverly Reid admitted that Michaella was determined to better her performance in this second showing and pushed for the practices which had been happening for months ahead of the competition.

“Michaella is a very, very excited speller.  More enthused and more motivated sometimes than I.  If I say 3 o’clock, she is there and she has always been going the last mile and Michaella exhausted the words in the very first week of spelling (practice).  He did excellently well, she encouraged me a whole lot and I find her to be a very, very, very brilliant girl. I am excited to see that she won today.”

It was a stiff competition, it was one that took much grit and I am telling you when I saw that she (Michaella) was hanging in there after 17 rounds, I remembered when she entered the competition tow years ago when she was a first runner up, I whispered to her that ‘we’re gonna get them the next time’ and Michaella truly, truly demonstrated that today.  We are blessed to have some of the brightest minds in the Turks and Caicos Islands and it was definitely seen at the competition and I must thank the organisers for a job well done, the coaches from every school, they prepared their students well to represent.”

Michaella Achille, who is the top student in her class, was proudly supported by an enthusiastic of schoolmates and her mother; among her prizes was an I-Pad.