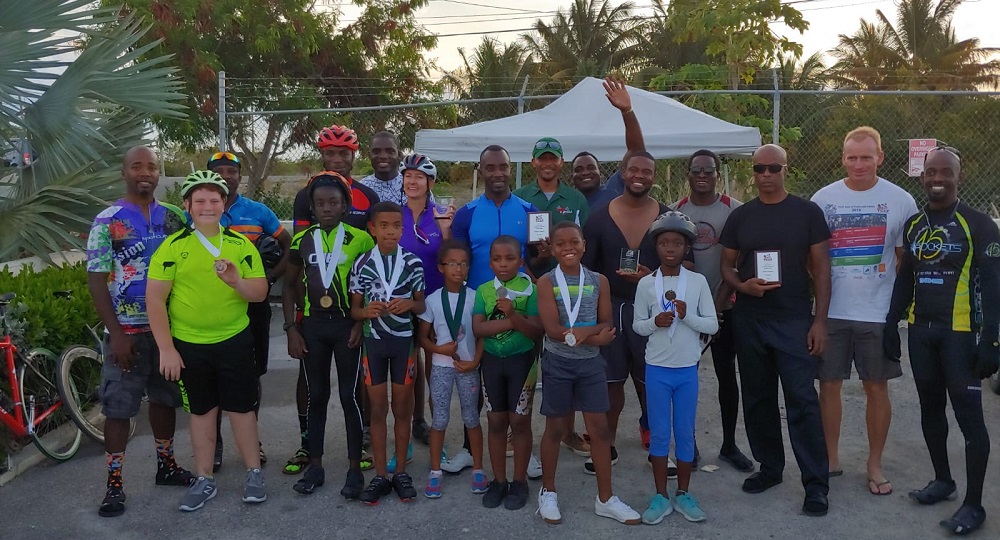 #Providenciales, May 3, 2019 – Turks and Caicos – The Express Classic saw the newest racing event in the TCCF’s lineup. A criterium race sponsored by Long Bay Express. The event saw more than 20 adult and child cyclists compete over six categories.

The 2019 cycling season which officially began in March, saw the introduction of the UCI standard categories. Elite Male (Men age 18 -39), Masters Male (men 40 and up), and for the first time this season, a female category. There were also three separate children’s categories reflecting the experience levels of our young cyclists; novice, intermediary and advanced. The Masters and Elite categories did 6 laps (36 miles) between Hevan Down Rock and Tropicana Roundabout, female 5 laps (30 miles) and all three kids cats did one lap (6 miles)

The Winner in the Masters Category was the 2018 Tour champion Friedise Registre, followed closely by his main rivals Shanwell Gardiner and Sean Rodgers in second and third respectively. Young sprinter, Tyrone Bishop took first place in the Elite, in second was Earldarrel Basden and Anthony Plunkett came in third. Gabriella Hegedus placed first in the female category, and Kate van der Bank came in second. Both women were pleased to see a female category and encourage women in the islands to get more involved in cycling.

Sean Walters and Ethan Gardiner continued their fierce but friendly rivalry in Kids Cat1 with Sean besting Ethan for the win. Both star junior cyclists are looking forward to taking their talents to regional and international meets in the upcoming months. Kymani Ewing held on tightly to his Kids Cat. 2 title, though first time racer Renardo Palmer made him work for it. Ethan Bubaker stayed in hot pursuit coming in third place.

Kids Cat 3 was all about the little ladies. Hayley Williams placed first with Danielle Gardiner in second place. The girls expressed their excitement on winning and are looking forward to competing during the rest of the season.

The first two month of the 2019 cycling season were abuzz with action. Starting with the first race of the season on March 3rd, the aptly named Hell of the West. A grueling 40-mile road race focused on all the hills throughout Providenciales. The Masters Winners were Shanwell Gardiner, Dan Redmond and Sean Rodgers respectively.  Elite Winners were Anthony Plunket, Chevron Bishop and Tyrone Bishop.

On April 6th the first annual century took place on North and Middle Caicos. The 110-mile race was a test of endurance. Shortly after the start of the race, there was a blistering solo attack by Sean Rodgers, which he managed to hold of the pack of the chase riders for almost 40 miles. At the end of the 110 miles, Sean Rodgers emerged victorious with, Fred Registre and Shanwell Gardiner placing second and third respectively. Elite winner Omard Gardiner was the only survivor of his category and was pleased to receive his first podium for the season.

Next up for the TCCF is the 3rd Annual IGA National Heroes Day Classic, a 50-mile road race where participants will compete for the coveted Clive Stanbrook Floating trophy.

The Turks and Caicos Cycling Federation wishes to thank our sponsor Long Bay Express, the public who came out to support the event, and our volunteers who assisted in making this event a success.