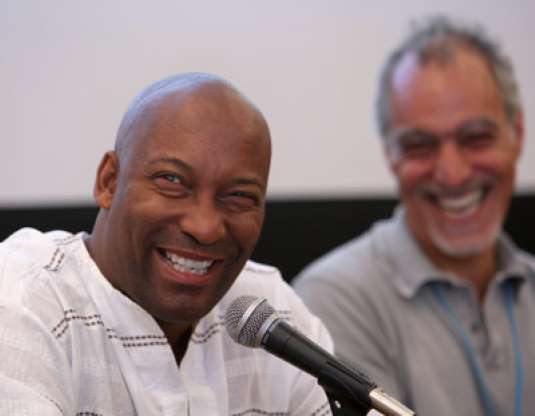 #Providenciales, May 1, 2019 – Turks and Caicos – On Monday, the entertainment industry and the world lost a brilliant man in John Singleton.

Singleton, at just 23-years old produced an epic story – Boyz n the Hood – which not only indelibly impacted the narrative on life as a Black American but the movie introduced some of the more enduring Black American superstars of today.

Interestingly, as the Turks and Caicos prepares for a new Film Festival, this journalist, (Deandrea Hamilton) is reminded of the time when the award-winning director was in country and a part of the previous film festival.

Here is a photo of Singleton while in Turks and Caicos in 2007, whom I had the opportunity to interview as a member of the news team of WIV.

Mr. Singleton was humble in that interview and he was delightfully prepared to share on his steps to success and to encourage dreamers.

I recall that he even got up from his prestigious table, walked over and softly gave our crew advice on how to better capture the star-studded event.

Naturally, his suggestion was brilliant and when I looked over to say thank you for the advice, he winked his pleasure at helping out and topped it off with a thumbs up.

John Singleton; more than a great story-teller, but a tremendous story-maker.

John Singleton speaks at the “Music in Cinema” panel at the Palms during the Turks and Caicos Film Festival on October 19, 2007 in Turks and Caicos.  Photo by Wired Images.