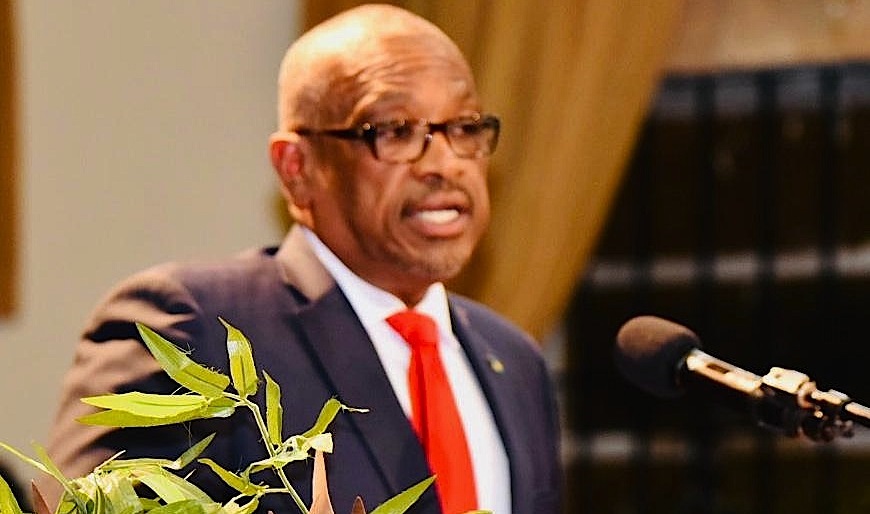 And, he called on the church to pray for the soul of the marine, who served for more than 30 years, and his loved ones.

“I offer my condolences also to the Royal Bahamas Defence Force.  I also ask you to pray for the other members of the Force who witnessed the killing of a fellow officer.

“This is a terrible tragedy. Let us continue to pray for peace in our land and for all of those who are victims of crime and for their families,” said the prime minster on Monday, April 29, 2019 at the church, located on Deliverance Way, Malcolm Allotment East.

The matter is being investigated by the Royal Bahamas Police Force, and the Minister of National Security has announced a review of security at government institutions.

The Prime Minister went on to thank the men and women of all uniformed branches who protect the country daily.  He further called on all to never forget their sacrifice and their devotion.

Directly addressing the congregation, the Prime Minister said: “It is always a great joy to be in fellowship and worship with those who love the Lord, especially in the Easter Season.”

He regards Easter as a time of new life and rebirth: “It is a season of hope and of new beginnings as we remember and celebrate the salvation and redemption that is God’s eternal outpouring of love.”

The Prime Minister said he was especially happy to be at Voice of Deliverance as it celebrates its 37th Annual General Assembly under the theme: “Catch the Vision, Know that God Shall Prevail & He Will Complete the Process.”

The Prime Minister wished favour and grace upon the church and God’s blessings on its leader Chief Apostle Leon Wallace.

“Let these be days of love and fellowship as you meet in the spirit of: 1 John 4:16 – “And so we know and rely on the love God has for us.  God is love.  Whoever lives in love lives in God, and God in them,” the Prime Minister quoted.

He then reflected upon recent events which marred the “most sacred day” of the Christian calendar. On Easter Sunday an estimated 253 people in Sri Lanka were brutally killed and several  hundred others wounded during worship, in claimed terrorists attacks.

In response to this attack, part of the Prime Minister’s Easter message reminded The Bahamas that: “We are blessed to live in a generally peaceful land devoid of ethnic strife and war, though we must continue to confront the violence in our land.

“We are blessed to live in a country where there is religious freedom and freedom of association and worship.  …Bahamians and residents are able to worship freely and in safety.”

The Prime Minister also noted other incidents around the world, namely in New Zealand during attacks on mosques which left a number of Muslims dead or wounded. Similarly, in the United States reports of “terrible news” of the killings of Jews worshiping in synagogues.

“Such hatred and violence against Christians, Muslims, Jews and others is attack an attack on the dignity of us all, who are made in the image and likeness of our God, who is a God of love and mercy,” the Prime Minister said.

He then shared words from Pope Francis, which he said, touched his heart: “The thing the church needs most today is the ability to heal wounds and to warm the hearts of the faithful; it needs nearness, proximity.”  As a medical doctor, the Prime Minister said he understood exactly what he was saying. “I believe that the same thing is true for the Church.  You have to meet people where they are at.  They first need your compassion and love and mercy.  “Only then can they hear the Good News of salvation and redemption.”