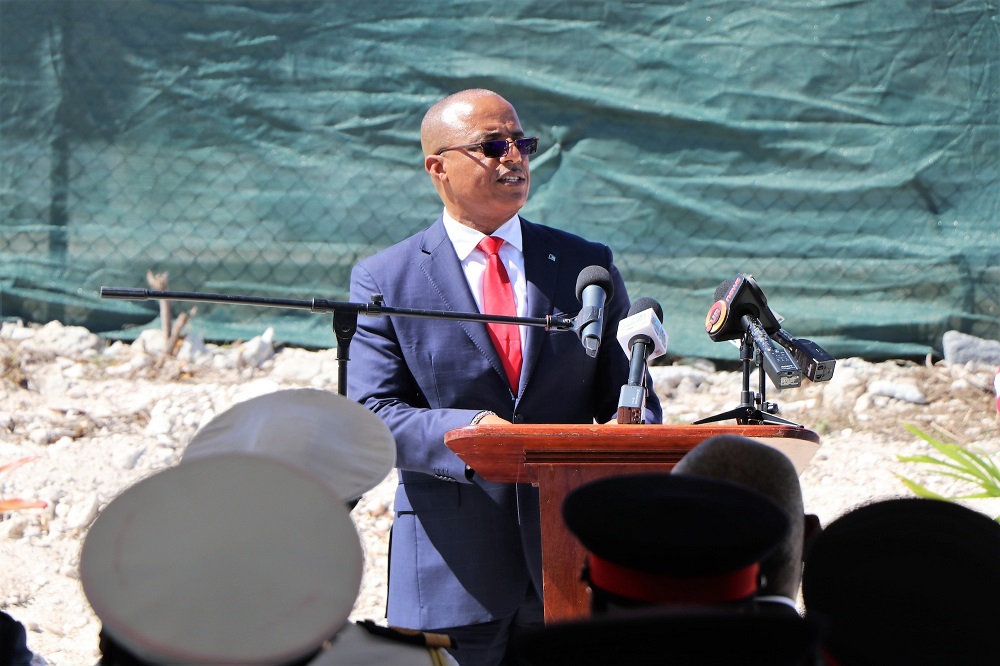 #Mathew Town, Inagua, April 24, 2019 – Bahamas – During the The Royal Bahamas Defence Force (RBDF) and United States Northern Command (Northcom) Radar Commissioning Ceremony in Mathew Town, Inagua, on April 17, 2019, Minister of National Security the Hon. Marvin Dames pointed out that, for The Bahamas, increasing regional and international threats meant decentralization of the RBDF for the sustainment of security operations and humanitarian assistance.

“Decentralization of both the operational and administrative components of the Defence Force commenced in three phases in the northern, central and southern Bahamas for effective interdiction at strategic locations,” Minister Dames said. “All three phases are operating concurrently.”

He added: “The first phase included the acquisition of patrol crafts and dredging of harbours. The second phase focused on the expansion of existing and the construction of new bases. Specifically, focus will be given to the expansion of the Inagua base and the construction of a Ragged Island base, where most of the security threats originate. The third phase is the acquisition of detection and tracking technologies.”

Minister Dames said that the Government was appreciative to the Government of the United States, particularly the Department of Defense (DOD), for the donation of a $2.1 million Long-Range Coastal Radar, as an added dimension to the augmentation of The Bahamas’ multi-layered programme.

“To ensure that the entire base at Inagua is brought up to standard and to complement this new technology, contracts were signed totaling $573,000 with three construction companies on the island for the rebuilding of new units,” he noted. “The new structures will include a sick bay, detention centre and a mechanical building. The total proposed projected capitalization and development including the decentralization programme over the next three budget cycles is expected to cost approximately $133 million.”

Minister Dames pointed out that, as it relates to the installation of the Kelvin Coastal Radar, it fell into the framework for Command, Control, Communications, Computers, Intelligence, Surveillance and Reconnaissance, commonly referred to as the C 4 I S R.

“This coastal radar will serve to enhance the Defence Force’s efficiencies and effectiveness of its interdiction efforts,” Minister Dames said. “Note that the agency will not operate in silos but, as necessary, in conjunction with Operation Bahamas, Turks and Caicos known as OPBAT.

“This longstanding, multilateral counter-drug operation between the United States, The Bahamas and Turks and Caicos Islands focuses on narcotics interdiction and other forms of trans-organized crimes.”

Minister Dames stated that past experiences had proven that no single asset or equipment could adequately combat the threats and challenges of the day.

“Hence, today’s installation is part of a broader multi-layered security programme asset, equipment acquisition, and collaboration,” he said. “At this time, let me take this opportunity to thank the U.S. Department of Defense (DOD) for the donation of the Over-The-Horizon Tracking System at the Coral Harbour Base and aboard patrol and aircraft which preceded this donation.”

Minister Dames pointed out that the technologies, as part of the multi-layered approach, would also incorporate the use of a multi-agency drone technology programme.

“The Government of The Bahamas is in the process of finalizing a $17 million contract with a vendor for the acquisitions of short and medium range drones to assist with interdiction and surveillance efforts under a multi-agency drone programme,” he stated. “Under the Heads of National Law Enforcement Agencies (HONLEA), this programme symbolizes the continued need for local law enforcement institutions to eliminate silos and make concerted efforts to improve communication and collaboration. The drone programme will be led by Royal Bahamas Defence Force.”

Minister Dames said that keeping one’s country safe is challenging for any nation, regardless of its size; and that the task is mammoth, and it is only expected to become more complex and multi-faceted.

“Therefore, law enforcement agencies are expected to become more team oriented, flexible and resilient in their defences, while being capable to respond to any call for assistance with speed and agility. In addition, the reliance on technology will only continue to grow and so will multilateral partnerships,” he said.

Minister Dames noted that the day was a testament to both, and persons could be rest assured that the Government of The Bahamas was committed to advancing the security of the country, through regional partnerships and technological investments as they were paramount for enhancing security.

“Again, I would like to thank our regional partner the United States of America, in particular the Department of Defense, the Department of State, U.S. Northern Command and NORAD led by General O’Shaughnessy, and the U.S. Embassy in The Bahamas led by Chargé d’Affaires Ms. Stephanie Bowers, all of whom play a key role in the security of our region.”

“The world is watching and today the commissioning of this long-range coastal radar system on the island of Great Inagua reflects a pivotal milestone in the history of the country,” Minister Dames added. “I am extremely pleased that we all can be a part of this momentous historical event.”