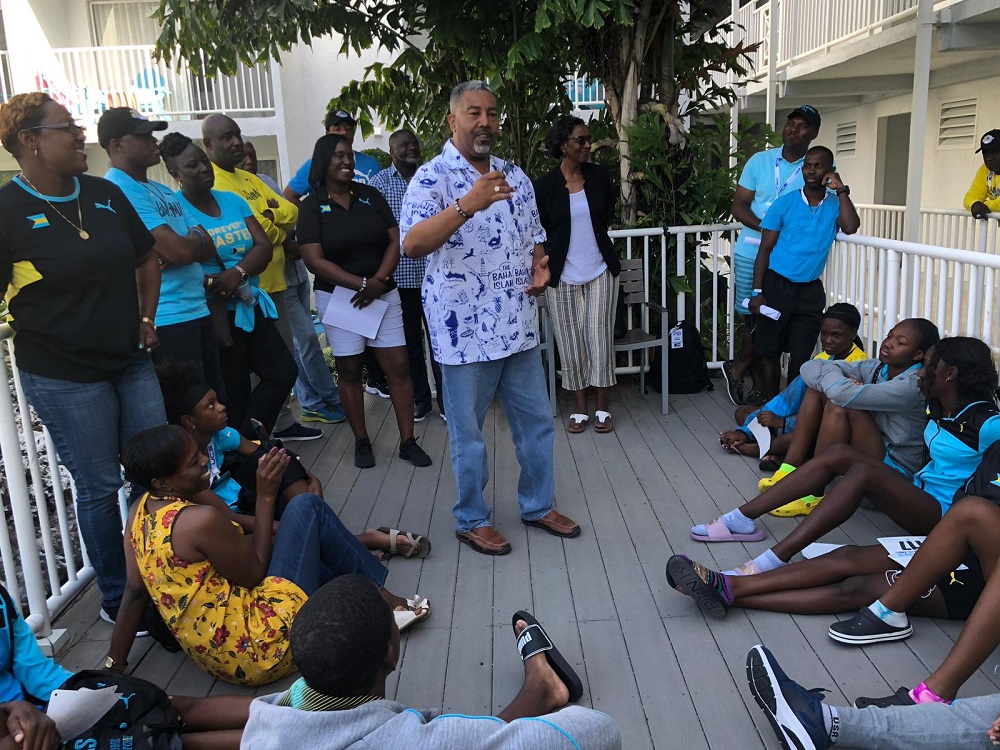 Cayman Islands, April 23, 2019 – The commitment by The Bahamas Government to the Carifta team is an investment and not a sacrifice said the Hon. Frankie Campbell, Minister of Social Services and Urban Development, as he addressed the 50 member team at the 2019 CARIFTA in the Cayman Islands.

Minister Campbell, who substituted for the Hon. Lanisha Rolle, Minister of Youth, Sports and Culture, (MYSC) gave the athletes a pep talk affirming the government’s support for them.

He said, “The other forms of support given to you is not regarded as a sacrifice but an investment in your future, an investment for which you and all other athletes have given immeasurable returns because no amount of advertising dollars could match what you do for our country when you step out on the track wearing your aquamarine, black and gold.”

At the end of the Games, The Bahamas placed second overall.

In motivating Team Bahamas, Minister Campbell commended Drumeco Archer, President, Bahamas Association of Athletic Associations and his officials, team managers, coaches, chaperones and all the persons who worked behind the scenes to prepare the athletes for the competition.

He extended special recognition to parents and guardians who are often not mentioned in the victory but, who would have been instrumental in the preparation of the athletes.

He also congratulated the athletes and told them they were all winners as he was reliably informed that the selection criteria for 2019 CARIFTA was based on the international qualifying standards.

Minister Campbell informed Team Bahamas that their flag  is “respected” and they were expected to uphold the long-standing legacy.

Minister Campbell shared his prediction that Team Bahamas would leave the Cayman Islands with many medals.

Lynn Terez Nixon, also known as the comedienne Dynamite Daisy, did her part to give a ‘winning talk’ to the athletes.

“You look very ordinary, you don’t look like a winner because of the outside, but when you have something on the inside of you especially the power of God, you are a winner whether they realize it or not,” said Mrs. Nixon.