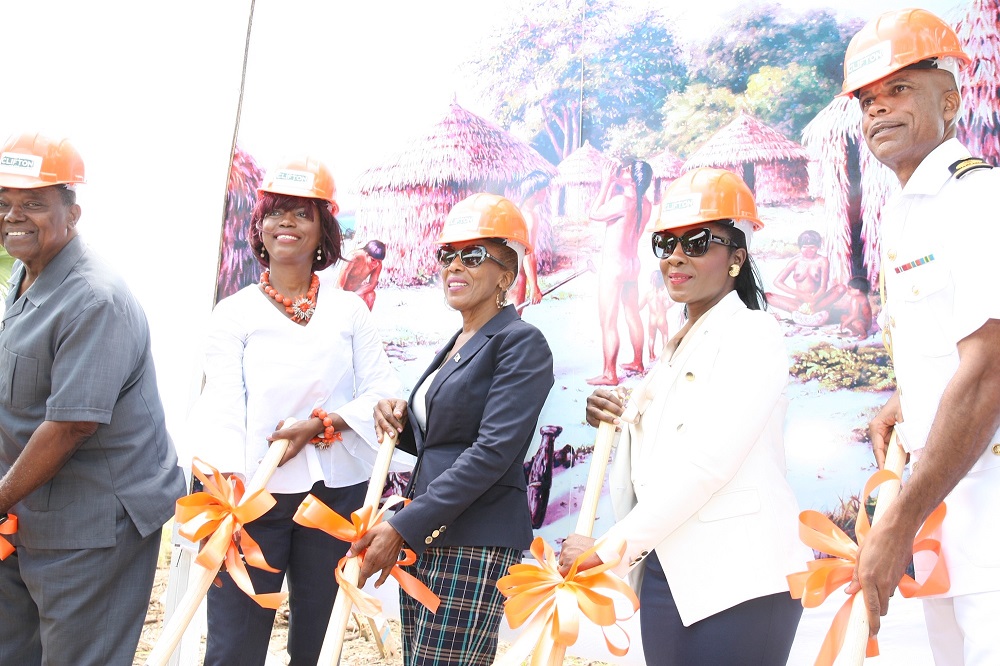 #Nassau, April 27, 2019 – Bahamas – Against the backdrop of balmy ocean breezes and crystal blue waters, ground was broken for the establishment of a Lucayan Village at the historic Clifton Heritage National Park, Southwest Road, Friday, April 26, 2019.   A Lucayan Village Billboard was also unveiled.

The ceremony marked the first in a series of events that are intended to revitalize the heritage, history and culture of Lucayan, European, and African ancestors.

In her remarks, Ms. Ferguson recognized members of the Coalition who were present and thanked them for their efforts to save the property on which the Clifton Heritage National Park resides.

She said, “Bahamians felt this was important enough for them to arouse themselves and get into the consciousness of our nation and say this is worth fighting for; this is worth saving. This piece of property is costing the Bahamian people $24 million.  That’s how you invest in your history when you believe in your history.”

The Chairman invited Bahamians to observe as the Lucayan Village is being built and to volunteer to help in its construction.

In 2018, at a cost of $100,000 the Authority developed a review called ‘Clifton Rising’ which will introduce new experiential tours called ‘Portals from the Past’. The excursions are intended to reflect the cultural traditions of the Lucayan Amerindians, the Loyalists, the African slaves and the free black Loyalists.

“Each platform will educate our visitors about our country’s rich, proud and diverse history. They will allow both our local and international visitors to become a part of our history through vigorous and exciting interaction and will serve as creative classrooms to educate our students,” said Ms. Ferguson.

Minister Rolle, who spoke on behalf of Dr. the Most Hon. Hubert Minnis, Prime Minister, said the launch is evidence that since its establishment in June 2004 the Authority has not wavered in its purpose to manage, maintain, preserve, promote and develop Clifton Heritage as a national park and historical heritage site.

She said the Authority is continuously committed to upholding its mission and mandate as promulgated by the Government of The Bahamas, preserving the heritage and culture in this distinguished area of The Bahamas.

The Minister said Clifton Heritage is the only national park in The Bahamas where the historical and cultural legacy reside evidencing three distinct civilizations that existed in The Bahamas namely the Lucayans, the Loyalists and the Africans.

“The Bahamas Government seeks to formalize the experience of going down what we know as memory lane and ensuring that as a people we know our past, we preserve it in this present day and concomitantly we take the necessary steps to secure the memories, spirit and artifacts of the Lucayan people for the benefit of future generations.

“May the establishment of this Lucayan Village serve as a tribute to Bahamian history, strengthening our cultural identity and with our relentless resolve and commitment to ensuring that, notwithstanding that we are in the Year of Our Lord 2019, all know and remember that the 12th century existed and the people of Lucaya left for us the inheritance of a rich heritage and the pride of a proud and grateful people,” added Minister Rolle.

She thanked the Authority and all stakeholders who have invested in the success of the initiative, preservation and development of Clifton Heritage.