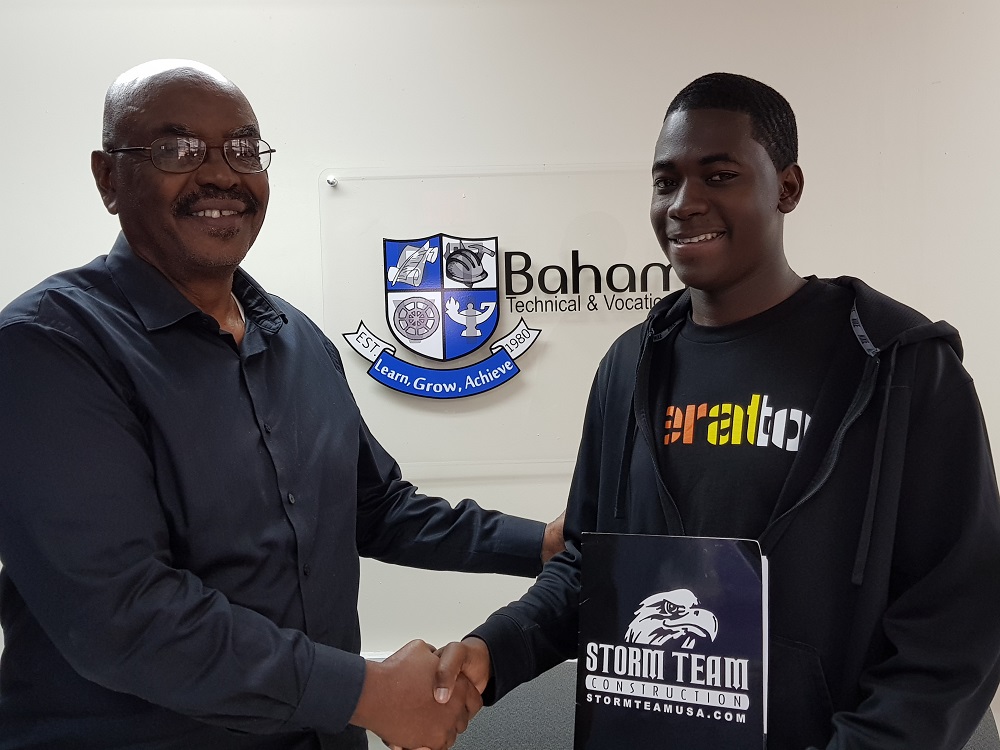 Odler works at a marina where he met Chief Executive Officer (CEO) of Storm Team Construction, Chad Simkins and the two became friends. He told Mr. Simkins about his internship and Mr. Simkins offered Odler the opportunity to intern with his company. Storm Team Construction is a company that specializes in rebuilding and restoration after storms and has several locations across the United States of America. The company has received several awards including the Service Excellence Award by the United Association of Storm Restoration Contractors.

When Odler realized he would be completing his internship abroad, he felt excited and blessed for the opportunity. Most of all, he felt confident and prepared because of the education he received from BTVI.

“I just want to thank God for giving me this amazing opportunity to be the first student from BTVI that had a chance to intern abroad. Special thanks to CEO of Storm Team Construction, Chad Simkins who went out of his way, allowing me to intern with his company and making sure all my needs were taken care of,” said Odler.

Odler spent five weeks interning at Storm Team Construction in Jupiter, Florida, and completed the required 160 hours for his internship. During this time, Odler was tasked with constructing formwork for concrete walls, constructing stud walls, installing doors, roofs and windows and other related tasks. He even completed a short online course on installing window and door systems while he was there. He said it was easy for him to adjust to the work environment based of what he did in class and working alongside his father who is a carpenter.

When he was not working, Odler would go fishing with friends which he describes as one of his best experiences. He learned how to clean and maintain a vessel, create boat knots, fishing techniques and how to drive a boat. He also attended Bible study, went to bowling alleys, beaches and restaurants, taking advantage of his time there.

Odler pointed out that his most memorable experience was watching how hard the employees around him worked; he alluded to learning what it means to earn an honest living. This was in addition to learning the importance of networking with those who could help him grow professionally and achieve his goals.

Meanwhile, BTVI Career Services Officer, Michael Smith, explained how impressed he was not only with Odler’s initiative to secure the internship, but also his outstanding performance during it.

“His performance speaks volumes to the strength of the instruction he received in BTVI’s Carpentry program. He was able to teach Storm Team Construction’s employees techniques and safety practices based on his OSHA (Occupational Safety and Health Administration) training at BTVI. Based on what was reported by the company, his internship assessment forms show an outstanding performance,” said Mr. Smith.

Odler is appreciative of the internship component of BTVI’s programs and believes it is an integral part of making the transition from the classroom to the work environment seamless.

“Internship provides real life experience and exposure. It teaches you how to communicate with colleagues, enhances the practical skills learned in class, leaderships skills and how to be a team player. It can help you acquire more education and gives you the opportunity to learn more about yourself. To know yourself is to know your goals and do your best to achieve them,” he said.

“If offered a job right now I would take it! I feel the amount of education I got from BTVI was enough to prepare me for the work field. Right now, my goal in to continue focusing on my education so that I can be a Project Manager one day,” said Odler who is set to graduate from BTVI in May.

“I had an awesome time with Storm Team Construction. If I had a chance to do it again, I would,” he added.