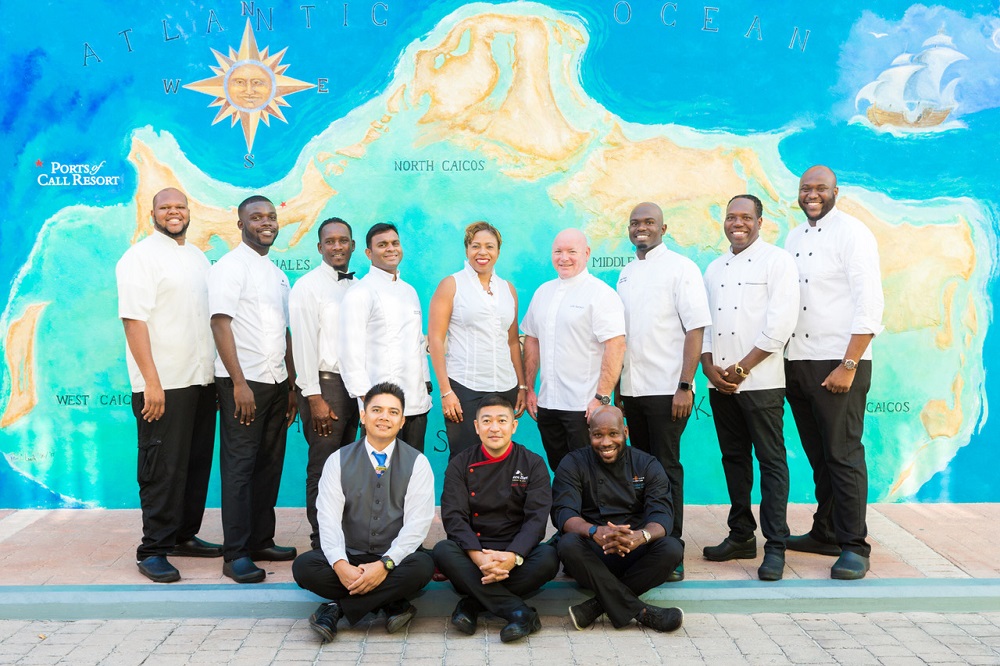 #Providenciales, April 25, 2019 – Turks and Caicos – TCI’s Culinary Team (Team TCI) is all set and ready for the 2019 Taste of the Caribbean Competition set to take place June 21st – 25th at the Hyatt Regency, Miami.

The team, which has won Gold for the past three years, will be led by Executive Chef Jason Heath of the Turks & Caicos Collection and will include Chef Joseph Charles of Grace Bay Club, Chef Martin Wilkiens of Seven Stars Resort, Chef Eversley Rowe of Kalooki’s Restaurant, Chef Jago Moore of Somewhere Cafe & Lounge (and also the reigning Cook Off Chop Off Champion), Chef Walky Gedeon of Solana, Chef Rajasekar Ravindran of The Hartling Group and Junior Chef Kevin Missick from the Turks & Caicos Community College, product of the TCI Hospitality Adventure Lit’l Chefs Camp.  Team Bartenders are Aris Florida of Amanyara and Delorno Mosley of Kalooki’s.

A product of the Turks & Caicos Hotel and Tourism Association (TCHTA) and managed by veteran/award-winning Chefs Colin Watson of Beaches Resort and Chef Edwin Gallardo of Seven Stars Resort, Team TCI is preparing to deliver more Gold wins for the “beautiful by nature’ Turks and Caicos Islands.

“This is yet another incredibly talented team,” said Stacy Cox, CEO of the TCHTA. “The commitment and drive to win and put ‘brand Turks & Caicos’ on the culinary map amazes me year after year. The training the team goes through leading up to the competition truly pays off and our repeated wins prove it. It speaks volumes that we are able to stand proudly alongside veteran teams from across the Caribbean”.

Always looking to strengthen and ensure a succession plan for the team, the TCHTA sent invitations to all its members and to the entire Turks and Caicos public in hopes of assembling a large group of top culinary professionals. The success of the Team wouldn’t be possible without the continued support of the TCHTA members and the support and encouragement of Turks and Caicos Islanders.

“We would love for every Chef in the country to get an opportunity to participate in a competition of this magnitude. We encourage restaurants to join forces with the TCHTA as Allied members to further strengthen our Culinary Team’s presence in the international realm. As we continue promoting the talents of these amazing Chefs, they will now inspire our ‘Lit’l Chefs’ and become mentors for our Hospitality Adventure culinary programs,” said Cox.

Hosted by the Caribbean Hotel and Tourism Association (CHTA), the annual Taste of the Caribbean competition is the region’s premier culinary competition, food & beverage educational exchange and Caribbean cultural showcase. It highlights the art of Caribbean cooking as it brings together top chefs and bartenders from the region to compete for honours in a variety of food and beverage categories.

Since 1993, CHTA member countries such as The Bahamas, Barbados, Belize, Bonaire, Cayman Islands, Curaçao, Jamaica, St. Lucia, Suriname, Trinidad and Tobago, and Turks & Caicos have sent their best chefs and mixologists to this event to demonstrate their skills, learn from each other and offer the general public a scintillating exhibition of the most delectable culinary treats of the region.  Competition categories include Beef, Seafood, Pastry, Chef of the Year, Jr. Chef and Bartender of the Year.

Another exciting CHTA event, Caribbean 305, is being held concurrently at Mana Wynwood. It’s an event that allows the teams to show off their respective countries with music, entertainment, indigenous food and creative cocktails, and is open to the public.

“We are a gold-winning team with two Hall-of-Fame inductees. This year will definitely be our year to win the coveted title of Caribbean National Team of the Year. We’re coming for the title, Trinidad & Tobago! said an excited Cox.