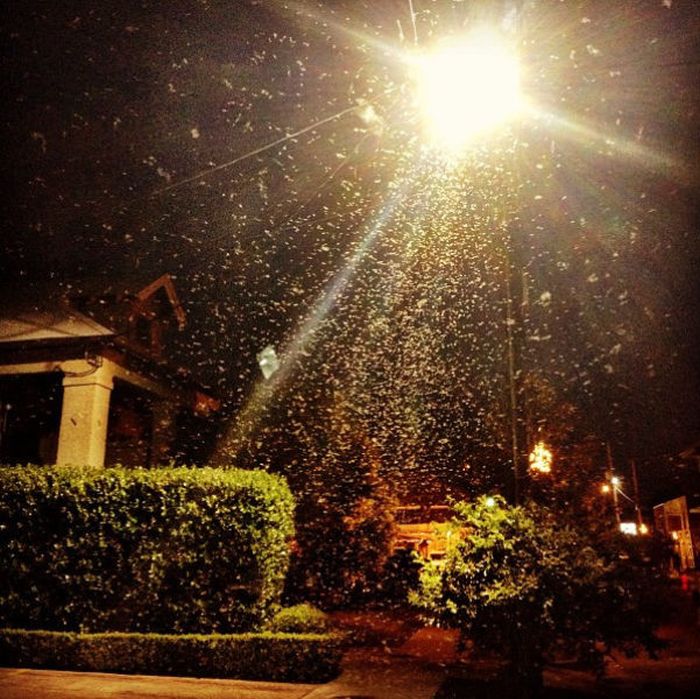 #Providenciales, March 14, 2019 – Turks and Caicos – Temperatures are warmer, not record-setting though the heat would have been almost unbearable were it not for the soothing balmy breezes – at least here in Providenciales.

The warmth in the weather signals the almost invisible transition of winter to spring in the Tropics and that warmth sets the mood for many, including termites.

Swarms of termites, have since last week in Providenciales, been filling the evening skies.  Getting in the way, in a dizzying horde which has people swatting, dodging, brushing and defending eyes and mouth… and it is all about sex, seriously.

Some romanticise the ritual and call it the ‘nuptial flight’ because these winged termites emerge from the ground in a frenzied mating ritual that leads to more termites.  Others take a more grim and likely popular perspective that the evening swarms of flying termites actually heralds an unwanted, troublesome and expensive population boom.

From Terminix: “Every so often, when conditions are right, subterranean termite swarmers develop within the colony and leave their underground nests to mate and start new colonies. Termite swarms can occur throughout the year but are most common when the weather is warmer, particularly in the spring.”

Terminix says,“While most termites with wings only mate, drywood termites are winged and will soon start eating wood, perhaps the wood in your home.  One defense against winged termites is a properly maintained home. This includes proper drainage, storage, ventilation and, most importantly, having a professional inspect your home for termites annually.”

Truly Nolen Turks and Caicos agrees and confirmed to Magnetic Media today that this swarming event is not just happening in Providenciales; every island in the TCI has lots and lots of termites.

“There are a lot of termites here and they can be anywhere because they are underground, subterranean.”

Truly Nolen says from March to May is usually when the swarms appear and during the warmer months is when calls from across the archipelago increase.  It was said homes are the chief chomping target for the termites.

“One of the ways to prevent termites from attacking your property is during the construction phase, you can actually pre-treat the soil and before you pour the concrete into the foundation.  A lot of people use the soil they get from clearing their land in their foundations, which increases the chances for termites.  It is much better to use the quarry rock.”

Environmentalists see this as nature maintaining its balance.  In fact, a beautiful article on Wild Tomorrow Fund, featuring the South African experience of entomologist, Barbara Wright explained, “Termites are one of the most important insects in the natural environment. Removing them from the ecosystem will likely cause it all to collapse.”

Wright said:  “Every year around this time, millions of termites explode from their nests in a frenzied nuptial flight that is vital for ecosystem health.”

At this time, as many as 30,000 eggs can be laid by one female, who can mate with several males and who later chews off her wings and finds a safe place to lay those eggs.  The males die after the nuptial flight.

Truly Nolen talked about those discarded wings and said they are a clear indication that you could have a serious termite problem.

“Once the heat hits them, they come out and if they are infesting an area within your house you will see the wings…”

The Environmental Health Department reported that only about two calls are received per year about termites in the Turks and Caicos; still Truly Nolen reminds residents to be alert.

Remember this is a mating ritual and the female termite will be building a new colony of termites, so check around your property, look for the nest or mound and get help to get rid of it.