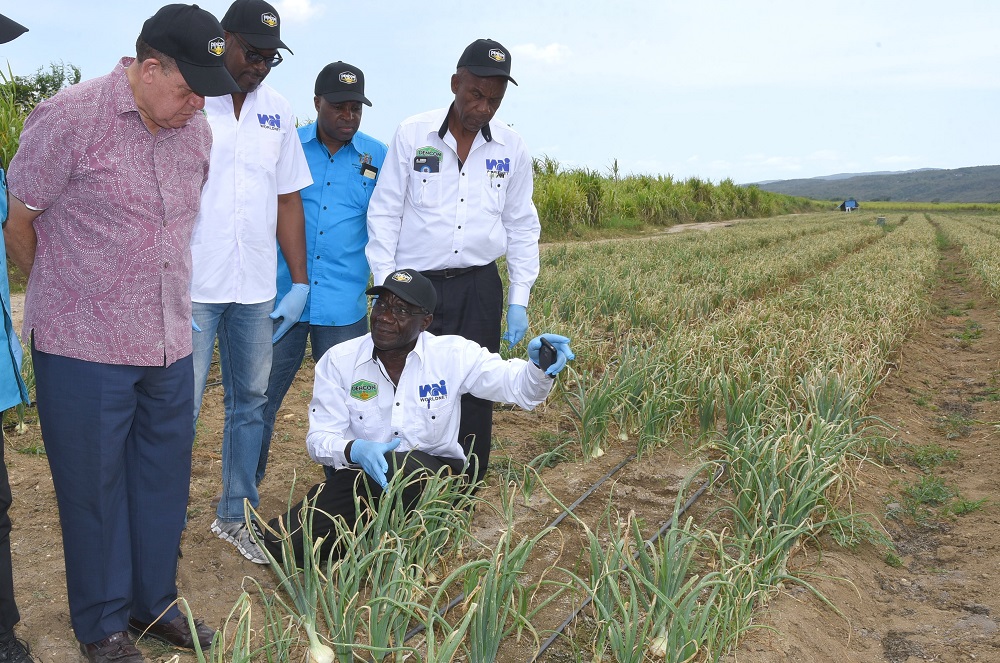 The Minister, who was addressing stakeholders in the agricultural sector at Dencon Foods and Farm in Spring Plain, Clarendon, on March 21, said the plan, which will be implemented soon, will be “money well spent”.

The Minister said the initiative can be implemented in “unity” between large operators and small farmers.  He lauded Dencon, whose parent company is in microlending, for its venture into agricultural production, and as a source of “inspiration” for businesses to expand and diversify.

The company is currently in onion production with more than 92 acres of the crop, and the Minister said another 200 acres will be leased to the company as they move to grow other crops.

According to Chief Executive Officer of the company, Hurshel Cyrus, Dencon Foods and Farm has in place the largest single production of onion since the 1980s, and its warehousing and post-harvesting facilities can dry and cure one million pounds of crop every three to four days.

“This facility will give us the ability to store varying vegetables and fruits, such as tomatoes, cabbage and others, for relatively long periods of time,” Mr. Cyrus said.

He told JIS News that the company sees a “big opportunity, where we can provide employment for people, with better wages and living conditions at our dormitories”.

Mr. Cyrus said when Dencon is at full operation as a “mother farm”, smaller farmers will have access to their technology.  He added that the company is in the community to stay, and they will perfect the growing and production of onion, and grow many other crops, such as peas, corn, and string beans.

The CEO said the company will build more post-harvest facilities to support local farmers, “and as we get the knowledge, we will share it, so all can benefit”.

Header: Minister of Industry, Commerce, Agriculture and Fisheries, Hon. Audley Shaw (left), listens keenly as Farm Operations Manager at Dencon Foods and Farm in Clarendon, Nicholas Duke (stooping), explains methods of onion production at the company, during a tour of the farm on March 21. Also on the tour (from second left) are Chief Executive Officer of the company, Hurshel Cyrus; Permanent Secretary in the Ministry, Dermon Spence, and Chairman of Dencon, Clive Blackwood.

Insert: Minister of Industry, Commerce, Agriculture and Fisheries, Hon. Audley Shaw, displays an onion grown at Dencon Foods and Farm in Spring Plain, Clarendon, during a tour on March 21.