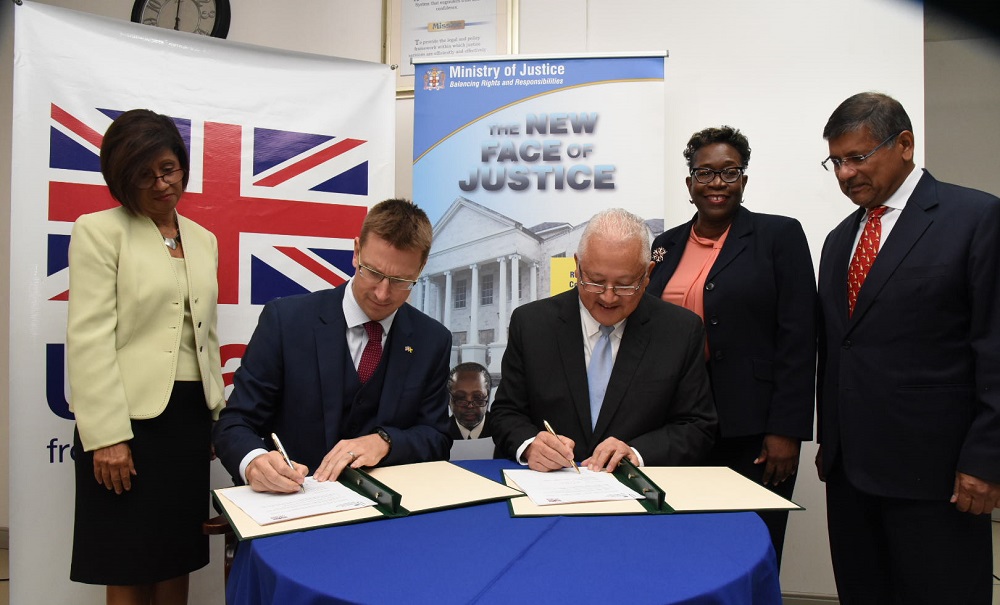 #Kingston, March 25, 2019 – Jamaica – The Ministry of Justice is to receive a $51-million grant from the United Kingdom’s Department for International Development (DFID), to fund the unification of prosecutorial services and strengthen the overall operations of the Office of the Director of Public Prosecutions (DPP).

Portfolio Minister, Hon. Delroy Chuck; and Head of the DFID in Jamaica, David Osborne, signed a memorandum of understanding for the support at the Ministry’s Constant Spring Road offices in St. Andrew on March 20.

The grant from the DFID will provide for a review of the governance of the Clerks of Courts with a view to placing the officers under the supervision of the DPP’s office.

The objective is to achieve harmonisation of prosecutorial services, by making the DPP responsible for all prosecutors in the court system.  It will also facilitate greater oversight for prosecution in the Parish Courts and the elimination of perceived conflicts of interest.

Mr. Chuck said the support will assist in ensuring that cases are tried in a timely manner and that there is no waste of judicial time.

“The idea now, of the Clerks of Courts being taken out of administrative duties and just concentrating on prosecutorial work means that not only will cases be better organised, better prosecuted but better outcomes will result,” he noted.

“I think it is important that we go this route because at the moment, the Clerks of Courts are actually under the supervision of the judges and the Chief Justice,” he said, noting that there are over 60 Clerks of Courts in the island.

For his part, Mr. Osborne said the support will unlock the full potential of the country’s prosecutorial capacity, and boost the DPP capability to prosecute serious organised crimes, and complex criminal cases.

“The job of my department is to help Jamaica to deal with its most pressing development challenges, and we have been a consistent and long-term partner for Jamaica for a number of years, providing around £15 million of grant funding to help tackle climate change, natural disasters, boost economic growth and deal with security and governance constraints,” he noted.

In his remarks, British High Commissioner, His Excellency Asif Ahmad, said the initiative is a good investment in the justice system and will assist in the transformation of the sector.

DPP Paula Llewellyn, for her part, said the idea of unification has always been supported by her office.  She noted that the technical support will better enable the office to carry out its functions.

“This is the era of transparency and accountability and those of us in the public service must understand that this must be a part of our DNA. It is important to ensure that all entities which perform public functions are organised and streamlined in a manner which ensures optimal efficiency,” she said.

The funds for the unification of the prosecutorial services are part of the UK’s Caribbean Anti-Corruption Programme (CACP), which is mandated to strengthen the anti-corruption framework of Jamaica and the Organisation of Eastern Caribbean States countries, by building the capacity of select institutions to improve accountability and transparency.

The programme is in line with the Ministry’s Justice Reform Implementation Plan, aimed at transforming the country’s justice system.

Header: Minister of Justice, Hon. Delroy Chuck (seated right) and Head of the United Kingdom (UK) Department for International Development (DFID) in Jamaica, David Osborne (seated left), affix their signatures to a memorandum of understanding for the provision of a $51-million grant towards strengthening prosecutorial services in the island. The signing took place at the Ministry’s Constant Spring Road offices in St. Andrew on March 20. Looking on (from left) are Permanent Secretary in the Ministry, Sancia Bennett Templer; Director of Public Prosecutions (DPP), Paula Llewellyn; and British High Commissioner to Jamaica, His Excellency Asif Ahmad.

Insert: Minister of Justice, Hon. Delroy Chuck (second left), listens to a point from Director of Public Prosecutions (DPP), Paula Llewellyn (right), during the signing of a memorandum of understandng between the Ministry and the United Kingdom (UK) Department for International Development (DFID) for the provision of a $51-million grant towards strengthening prosecutorial services in the island. The signing took place at the Ministry’s Constant Spring Road offices in St. Andrew on March 20. Others (from left) are Head of the DFID in Jamaica, David Osborne; and British High Commissioner to Jamaica, His Excellency Asif Ahmad.