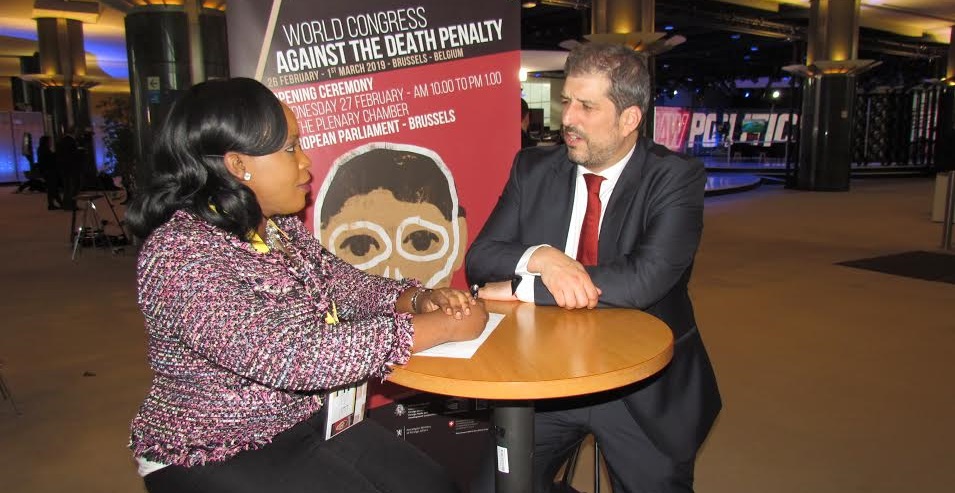 #Brussels, March 5, 2019 – Belgium – Together Against the Death Penalty (ECPM) Executive Director Raphael Chenuil-Hazan urged the Bahamian government abolish the death penalty and break away from what he calls the “fake solidarity” that seems to be preventing The Bahamas and other English-speaking Caribbean countries from becoming abolitionist states.

Chenuil-Hazan made this plea to the government during an interview with The Bahama Journal at the 7th World Congress Against the Death Penalty in Brussels, Belgium where he expressed concerns over The Bahamas keeping the death penalty as law and not using it.

Other English-speaking Caribbean countries do the same and Chenuil-Hazan considers this practice as a bad example.

“It’s kind of shaming and I don’t like shaming,” he said. “But it’s a reality of original solidarity.  I think that some countries in the Caribbean should stop this fake regional solidarity.”

ECPM is a French nongovernmental organization with a mission to abolish the death penalty worldwide.

The last execution took place in The Bahamas in 2000 when Bahamian national David Mitchell was hanged after being convicted for the murders of two German tourists.  Mitchell had an appeal pending before the Inter-American Court of Human Rights at the time of his execution.

However, the imposition of the death penalty in The Bahamas is no longer mandatory following a Judicial Committee of the Privy Council’s decision in a case, which ruled that judges can exercise discretion and should sentence only “the worst of the worst” and the “rarest of the rare” to death.

According to Chenuil-Hazan, breaking away from the “fake solidarity” would lead The Bahamas to a formal moratorium on the death penalty.  He suggested that The Bahamas embrace the United Nations General Assembly Moratorium Resolution and not continuously follow other Caribbean countries by voting against it.

“The Bahamas should vote,” Chenuil-Hazan said.  “It’s normal.  It’s logical.  Dominica should vote in favour, but they don’t just because of this strange solidarity.  You should go beyond and have your own identity based on your own situation.”

In a report released by the Advocates for Human Rights, The Greater Caribbean for Life, and The World Coalition against the Death Penalty, The Bahamas has voted against every United Nations General Assembly Moratorium Resolution and up until 2012, The Bahamas also signed the Note Verbale of Dissociation from the resolution each year.

If The Bahamas receives a formal moratorium on the death penalty, the country would be globally recognized as a state with a moratorium on executions.

Amnesty International identifies countries with formal moratoriums as states or territories where the death penalty is implemented, but no executions have been carried out for at least 10 years and which did not oppose the latest United Nations Resolution for a universal moratorium on executions.

Using China as an example, Chenuil-Hazan explained that thousands of Chinese are executed each year, but there is no decrease in China’s crime rate.

The ECPM director added that the government should have a strong willingness to educate Bahamians so that public opinion would change and Bahamians would understand that ending the death penalty is a part of entering a new world that has been embraced by countries in South America, Europe and Africa.

While abolishing the death penalty may be complicated for some to understand, applying it increases crime, according to Chenuil-Hazan.