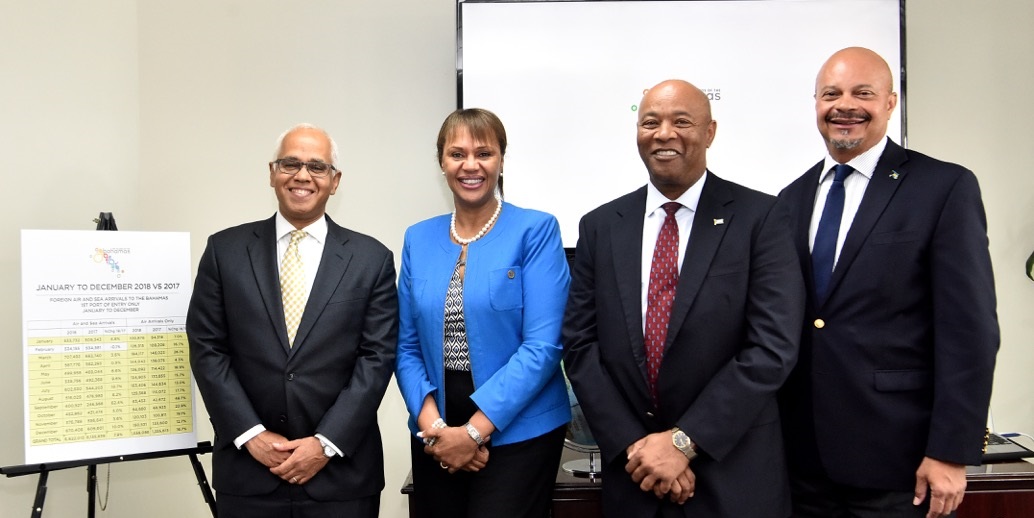 #Nassau, March 22, 2019 – Bahamas – The Bahamas received far more visitors to its shores in 2018 than in any previous year in its “entire history of being engaged” in the tourism business, Minister of Tourism and Aviation, the Hon. Dionisio D’Aguilar said Wednesday.

The increase in tourism business in 2018 was experienced nationwide — Nassau/ Paradise Island, Grand Bahama and in the major Family Islands.

Mr. D’Aguilar also announced that the major hotels on Nassau and Paradise Island recorded a 34% increase in room revenues during 2018, gains not experienced in the past ten years

“This is welcomed, heart warming news, at a time when we are endeavouring to drive our nation’s economy into higher gear,” Minister D’Aguilar said.

Foreign air arrivals by themselves, were up by 16.7% between the months of January to December 2018, compared to the same period of 2017. Air arrivals to Nassau/Paradise Island were up in every month of 2018 compared to 2017. The major hotels in Nassau and Paradise Island recorded a 34% increase in room revenues, gains not experienced in the past ten years.

Minister D’Aguilar said the “handsome increase” in visitor arrivals to The Bahamas, can be attributed to the successful elevation of the awareness and visibility of The Bahamas’ brand.

“In the international marketplace, tourism is an arena of fierce competition.  Through strategic, dynamic advertising, marketing and promotions, the Bahamas Ministry of Tourism and Aviation, along with major hotels and other key stakeholders, has been quite successful at elevating awareness and visibility of The Bahamas brand among travel consumers,” Minister D’Aguilar said.

“Over the last eighteen months, we have had several top brand hotels come on stream, namely the full opening of Baha Mar with its signature brands, the Rosewood, the Grand Hyatt and SLS. The increased room inventory has generated increased airlift.”

Minister D’Aguilar said all indicators project that the upward trend will continue throughout 2019.