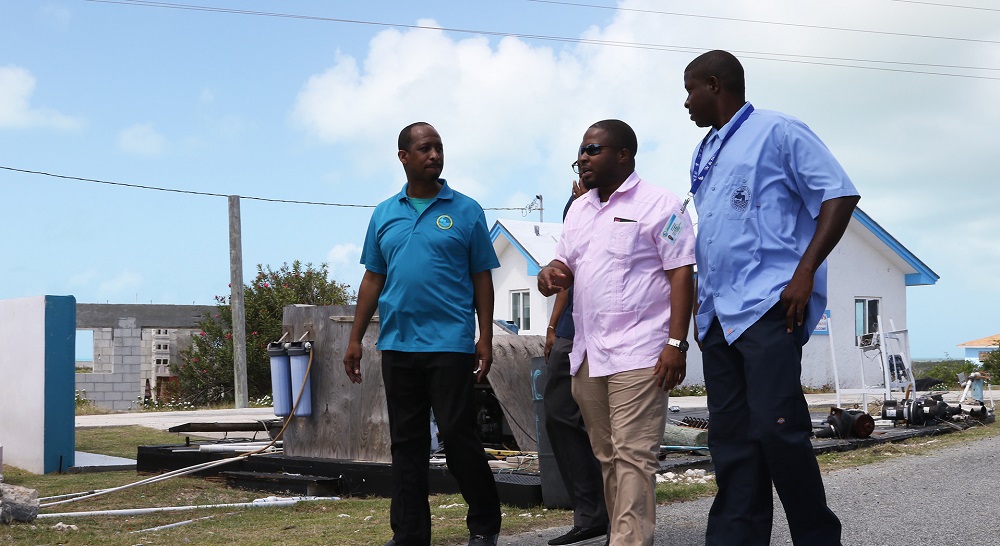 Ragged Island, March 4, 2019 – Bahamas – The Water and Sewerage Corporation (WSC) has an ample supply of water available in Ragged Island for residents or anyone who wishes to construct a home or business in the southern island.

Adrian Gibson, Chairman, WSC, and MP for Long Island, kicked off a busy day there (Thursday) before moving on to two other southern islands.

“You can mix cement or do whatever you need to do,” said the Chairman.

“They are supplied. We have a 15,000-gallon capacity for storage in addition to what we produce every day. The residents in Ragged Island are more than adequately sourced.”

Ragged Island is home to an estimated 32 Bahamians.  In 2017, Hurricane Irma devastated the sparsely populated, remote island leaving it without basic utilities including water.

Mr. Gibson emphasized the Government’s obligation to provide water. He said there is anticipation for further construction and development, so the corporation has factored in the island’s growth by doubling the water capacity.

“We’re assessing our plant and works that we have to carry out in Ragged Island. During the storm we lost that plant down the road and we’ve replaced that with double the capacity.

“The previous plant, approximately 2,000 gallons, was blown away. This plant has the capacity for 5,000 gallons. We anticipate doing our part to restore Ragged Island,” he said.

Mr. Gibson noted that the plant is now owned and operated by the corporation.

“This plant is one of the first ones that we took back. It is fully owned, fully operated by the WSC which cuts out the middleman and we’re able to save some $50,000 per year that we would have spent supplying the people of Ragged Island with water,” he added.

“Throughout the islands we have had various contracts that have been quite onerous on the corporation. We’ve formed a RO unit since my appointment and that unit is responsible for overseeing and administering contracts — taking over plants and so on.

“We have special RO trained engineers that we’ve recruited. Once the contract expires we’ll be taking over.”

A standby generator, a solar power reverse osmosis plant and electrical upgrades are among other initiatives on the drawing board for Ragged Island.

The delegation also traveled to Crooked Island and Acklins before returning to New Providence.