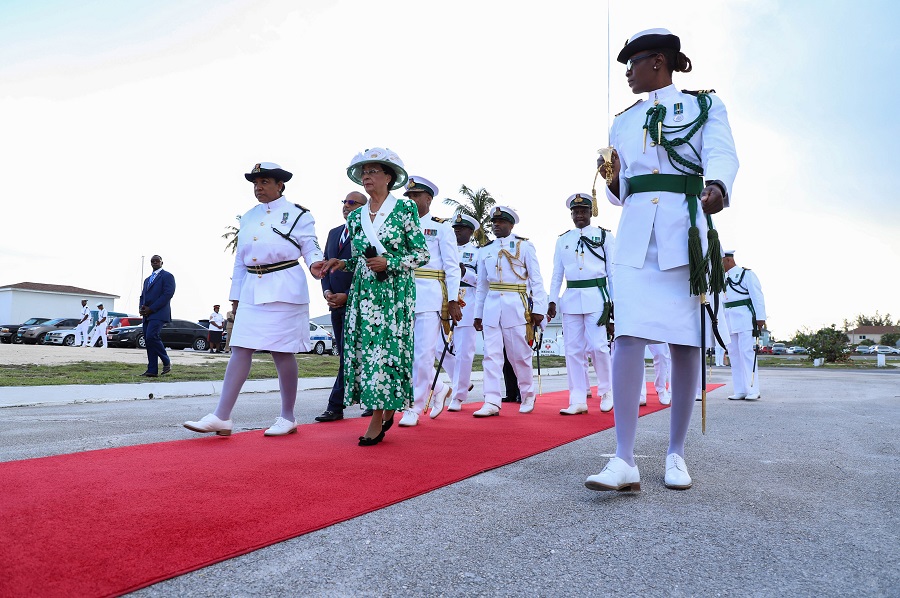 Coral Harbour Base, March 27, 2019 – Bahamas – The Governor General, Her Excellency The Most Honorable Dame Marguerite Pindling addressed members of the Royal Bahamas Defence Force on Thursday 21 March, 2019 at the Annual Governor General’s Divisions.

The Governor General’s Divisions is a military tradition where the Governor General inspects and addresses her troops on military parade in ceremonial fashion. Also attending the ceremony was Honourable Marvin Dames, Minister of National Security.

In delivering the keynote address, the Governor General commended Commodore Tellis Bethel, the Commander Defence Force, as well as his Officers and Marines for their hard work and dedicated service throughout 2018.

The Commander-in-Chief also used the opportunity to remember the late Senior Commander Amos Rolle, the former Commanding Officer of HMBS Flamingo, who died on February 25, 2019. HMBS FLAMINGO was attacked and sunk by Cuban Mig jet fighters during a routine patrol in the southern Bahamas on May 10, 1980.

The Governor General encouraged the members of the Defence Force to continue striving for excellence, as they protect the territorial boundaries The Bahamas.