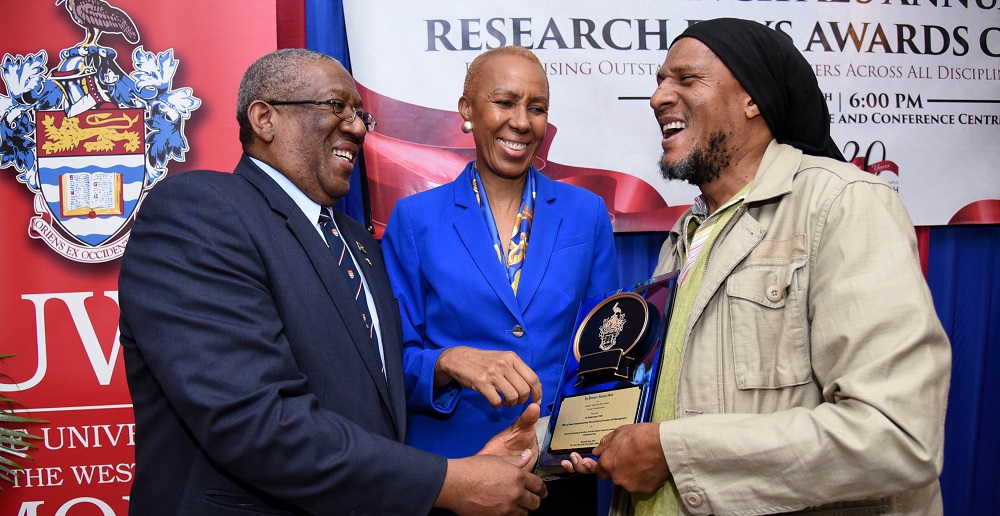 #Kingston, February 12, 2019 – Jamaica – The University of the West Indies (UWI) is being encouraged to provide ongoing support, through research, for accelerated economic and social development in Jamaica.

Minister without Portfolio in the Finance and the Public Service Ministry, Hon. Fayval Williams, noted that as a “knowledge producer”, the UWI is well positioned for this undertaking.

She also urged well-thinking Jamaicans to join the “research revolution” challenge issued by the UWI during its 20th Research Days events, from February 6 to 8.

“I accept this invitation and we all should. Research is about discovering new knowledge, which can lead us to innovation and technological change,” Mrs. Williams said.

The Minister added that “research is the diligent, systematic inquiry of validating, refining and generating new knowledge, which can lead us to social and economic development”.  She was speaking at the UWI’s Annual Research Days awards ceremony at the Mona Visitors’ Lodge on February 8.

The ceremony recognises individuals for work embodying the best cutting-edge research undertaken during the academic year under review.

In his remarks, Pro Vice Chancellor and UWI Mona Principal, Professor Dale Webber, noted that the University’s role in delivering high-quality research led to its inclusion among the leading tertiary institutions listed in the top five per cent globally.

The Times Higher Education World University Rankings designation placed the UWI at 591st out of the 1,258 institutions making the list.

“Research was 50 per cent of that ranking,” Professor Webber said, while urging the awardees and, by extension, the rest of the university community to own and “take control” of the achievement.

Professor Webber emphasised that the ranking must be maintained and can be done through the impact and pursuit of the research.

“I urge you to reach for the stars, reach out for your faculty and your friends so that we can build collaborative research,” he said.

Among the over 30 awardees, three were presented in the category of the Principal’s Awards for Public Policy.  They include: Director of the Office of Social Entrepreneurship in the Faculty of Social Sciences, Dr. K’adamawe K’nife, who provided technical and research support for the Micro, Small and Medium Enterprises (MSME) and Entrepreneurship Policy, which was reviewed and a new policy tabled in the Houses of Parliament in July 2018.

Also awarded was Professor of Child Health and Child Development, Maureen Samms-Vaughn, for two key research projects leading to policy development, including the creation of the National Strategic Plan for Early Childhood Development 2008 to 2013 and 2013 to 2018, and the National Parenting Support Policy of 2011.

Senior Lecturer in the Marine Division of the Department of Life Sciences, Dr. Karl Aiken, was recognised for his work on fish sanctuaries, which contributed to the Fishing Industry (Special Fishery Conservation Area) Regulations of 2012.

Header: Minister without Portfolio in the Ministry of Finance and the Public Service, Hon. Fayval Williams, looks on as University of the West Indies (UWI) Mona Campus Pro Vice Chancellor and Principal, Professor Dale Webber (left), presents the Public Policy Award to Director of the Office of Social Entrepreneurship in the UWI’s Faculty of Social Sciences, Dr. K’adamawe K’nife. Occasion was the UWI Annual Research Days awards ceremony at the Mona Visitors’ Lodge on February 8.