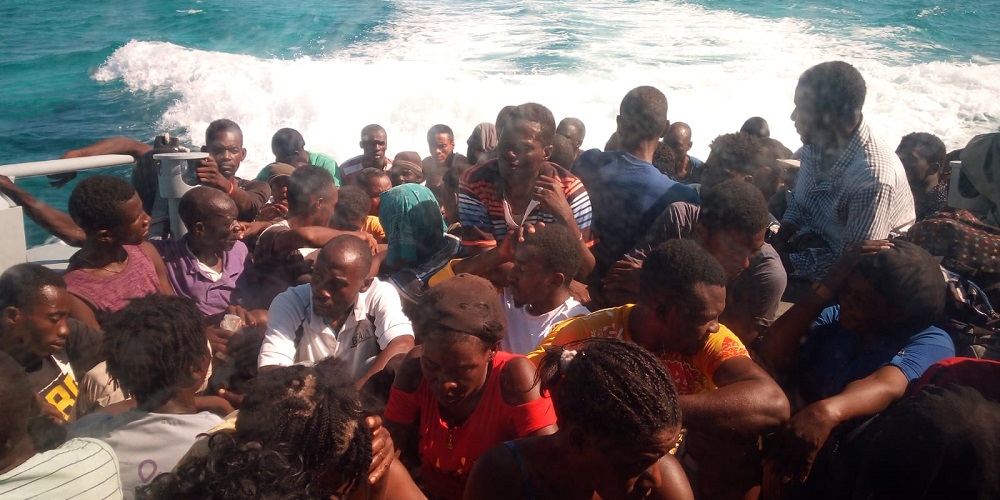 Coral Harbour Base, February 18, 2019 – Bahamas – The Royal Bahamas Defence Force apprehended a Haitian smuggling vessel west of Compass Cay in the central Exuma chain around 12:45 today. The apprehension was the culmination of an interdiction effort coordinated by the Defence Force involving the Royal Bahamas Police Force, OPBAT, the US Coast Guard, and concerned citizens over several days.

The interdiction operation was initiated after the Defence Force received information concerning the whereabouts of a migrant smuggling vessel in the southern Bahamas. A Defence Force patrol boat, an aircraft from the US-led anti-drug unit known as OPBAT,  (Operation Bahamas and Turks and Caicos Islands), and a US Coast Guard cutter began searching for the vessel with negative sightings.

The vessel–a wooden sloop–was seen by a civilian pilot in the area of Scrub Cays near the Tongue of the Ocean, west of the Exuma chain on Saturday 16 February.  The sighting which was also verified by the Deputy Chief Councillor for Exuma, Mr. Loan Rolle, was reported to the Police Force in Exuma.

A more extensive search was then coordinated by the Defence Force with the assistance of the Police Force aircraft with RBDF flight observers on board, and an OPBAT aircraft resulting in the Haitian sloop being spotted by the OPBAT aircraft near Compass Cay in the Exuma chain shortly after 10 a.m. this morning.

The vessel was subsequently intercepted by P-45 coxswained by Petty Officer Lamont Thurston around  12:45 p.m. today approximately 10 nautical miles west of Hawksbill Cay in the Exuma chain with about 64 undocumented Haitian nationals on board.

The undocumented migrants will be transported to Nassau where they will be handed over to Police and Immigration officials for further processing.

The Commander Defence Force, Commodore Tellis Bethel, extends thanks to the Royal Bahamas Police Force, OPBAT, the US Coast Guard, and concerned citizens for their invaluable support for the success of this operation. Commodore Bethel also expresses his gratitude for the diligence of his Operations Branch headed by Commander Clarence Dean with the support of the wider Force.

With news of the crisis in Haiti intensifying,  the Defence Force is also on the look out for illicit smuggling activities in the southern Bahamas in the event there is an influx of undocumented migrants from Haiti.

A temporary holding facility will also be set up by the Bahamas National Emergency Management Agency in conjunction with The Bahamas Immigration Department and the Royal Bahamas Defence in the southern Bahamas in the event of an increase.

The Defence Force is also collaborating with local Immigration officials, the United States Coast Guard, as well as with OPBAT to further strengthen border security in the southern Bahamas.

Thus far, the Defence Force has apprehended or assisted in apprehending a total of 207 Haitian nationals for the year. This number excludes the 31 bodies recovered from the waters off Abaco after their 40-foot conventional yacht struck a reef and sank on Saturday 2 February. Investigations by Police and Immigration officials into this smuggling incident are still ongoing.

Last year, the Defence apprehended or assisted in apprehending 1,172 Haitians.