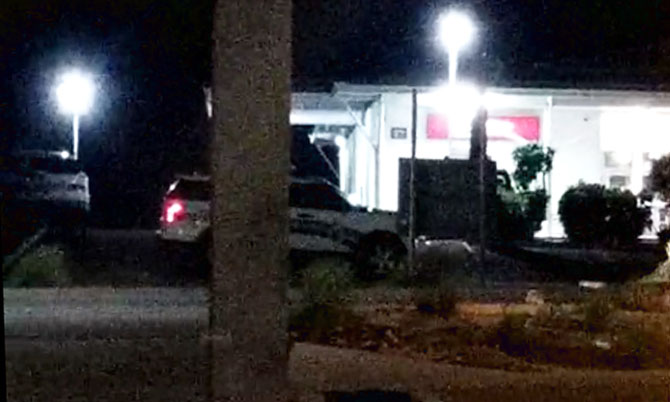 FROM VIDEO SHARED ON SOCIAL MEDIA

#Providenciales, Turks and Caicos Islands – Saturday September 1, 2018 – A man was shot in the leg Thursday night as he used the 24-hour banking services of CIBCFirstCaribbean on Leeward Highway.

The young man is reportedly doing okay despite the gunshot.

Cell phone video captured the investigation scene after 10 pm last night.  You can watch it in our Turks and Caicos Newscast of Friday August 31, 2018.

It is unclear if the armed robbers were successful or not.  Police have not released much information on the crime itself.  A Friday crime report from the Royal Turks and Caicos Police said this:

“The Royal Turks and Caicos Islands Police Force is investigating an incident that took place on Thursday, August 30th, 2018 at the First Caribbean International Bank around 9:20 p.m.  The man who was shot by armed gunmen dressed in dark clothing was transported to Hospital for medical treatment.  Police are also seeking the public’s help in a second incident Thursday night.

At 11:18 p.m., masked gunmen approached a Five Cays man and made good their escape with a grey Toyota car, license plate unknown. Investigations are ongoing.  Anyone with information that can assist in both matters is asked to call Crime Stoppers on 1-800-8477.”

The young man shot at the bank on Thursday night, we are told, is Lewis Omason of Jamaica.