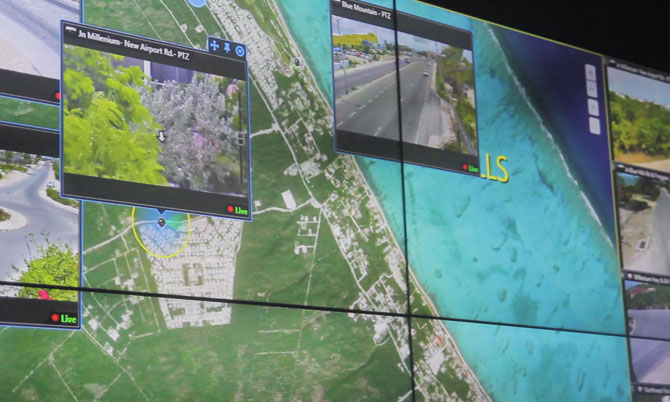 #Providenciales, Turks and Caicos Islands – August 1, 2018 – The criminal element is already shaking in its boots, Magnetic Media is told, following the reveal on Tuesday of CCTV cameras now installed across Providenciales; the Police Force and its Partners gave a media tour on Tuesday of the hub – and it was impressive.

James Smith, Commissioner of the Royal Turks and Caicos Islands Police led the tour and explained that the system is both Closed Circuit Television and a joint 911 Control Room, which will be staffed 24 hours a day, seven days a week with a Police Force Silver Commander.

“…able to pre-position resources; they’ll be able to put in place measures to prevent things happening or to react quickly when they do happen.  So this is a big deal for us, this is a fundamental stake change in the security of the country and of course, Provo is just the first step.  The Government has funded not only these CCTV cameras but they are going out to bid now for the second phase which will take Grand Turk into it and eventually we will get North and South Caicos as well.”

The cameras were described as a versatile technology which allows managers of the site to program, search and see minute details as they happen.

“This is a different kind of camera; it focuses on the number plate of a car…”

The Turks and Caicos Islands Government, said the Commissioner, is working on Automatic License Plate Recognition (ALPR) software which will change how motor vehicles are numbered in the country and it will complement the CCTV system.

Stan Hartling, investor and developer of the Hartling Group which owns three resorts in Providenciales spoke on behalf of the Sponsors of the new CCTV system, he was joined by Mark Durliat, another major resort investor from Grace Bay Resorts.  The Sponsors were roused to action last year after a spate of crime which attracted negative attention to Destination Turks and Caicos.  The group, on the record, expressed grave concerned about the impact of crime on tourism and resolved to support Government and Police in the abatement of crime in a most tangible way.

“It gave me the confidence that we as a country, the core business people understand the importance of the Police and of safety in this country if we are going to be sustainable.”  Mr. Hartling, explained that an online fundraiser was an amazing feat, “I think it was that in less than seven days, we raised about $600,000 specifically to be targeted toward national crime prevention.  We got immediate response and we had great meetings with all levels of government:  Governor, Premier, Deputy Premier, Commissioner of Police.  And what became evident to us – we were all getting panicked when were at that time last year when some of the crimes were increasing and it included home invasions and some armed incidents and the initial reaction is fear and then playing the police.   And it became evident to us that that was not necessarily the issue, we have some amazing people on the Police Force that really needed some help with additional resources and it became evident that normal ways to procure those were going to be timely and longer than some of us wanted.”

The private sector group was intimately involved in the complete overhaul of the 911 center, where re-wiring and retro-fitting was undertaken.  The revamping of the center was completed in record time; under three months.

Mr. Hartling said there was also concern for the Police officers who would have to respond to crimes in progress, including to suspects who would likely be armed and dangerous.

“So part of this group has bought very high grade defense-level Taser guns and I know the training has taken place, body-cams for police officers so that they can feel that what’s happening is being recorded and it helps for evidence in court, makes people a little bit more accountable when they are around these officers… so we still have funds there, so if there is something that the Commissioner needs we can respond within four hours if we have to.”

The Governor, who heads up National Security for the Turks and Caicos called it a moment of celebration.

“Modern policing requires, I think, three key ingredients: the human factor, the technical factor and the community factor.  Without the human factor, that is, well-trained, committed police officers under effective leadership nothing will be possible. TCI benefits from having in the RTCIPF, a local police force which is increasingly on top of its game.”  His Excellency, Dr. John Freeman congratulated the Commissioner of Police, James Smith, “My thanks to them and to him.  Without the technical factor, a police force is hobbled from facing down the criminals and would-be criminals. The RTCIPF is benefitting from increased technical capacity enabling it to be fit for the task, for that – thanks –  and I readily express them, are due to TCIG without whose support and very significant budgetary allocations none of these improvements including the CCTV project would be possible.  Without the community factor, a police force can never deliver optimally and community support takes many forms. A Police Force is not separate from the local community; it is part of it and relies upon it.  The Royal Turks and Caicos Police Force needs support if it is going to deliver on public safety.” 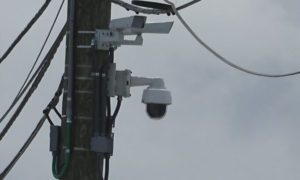 Governor Freeman said the private sector involvement and financial contribution to the CCTV project is a demonstration of the Community supporting the Police.

“I want to acknowledge and applaud that support by the business representatives here this morning.  I hope that all of us in these islands will benefit from this new facility.  Benefit in a way that really matters, namely enhanced security and public safety.”

CCTV video from as many as 106 specific areas in Providenciales is being beamed back to the Control Room, with the video segmented into zones.  During the tour it was explained that the cameras are in a testing phase now, but are already live and recording.

The Control Room is established at the Digicel headquarters in the Turks and Caicos.