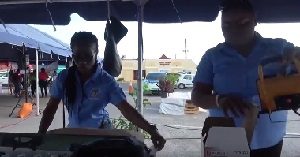 #Providenciales, June 4, 2018 – Turks and Caicos – In the lead up to the start of the Atlantic Hurricane Season, there was much activity across the region as nations brace for what is forecast to be an average to above average hurricane season, which officially begins today.  In the Turks and Caicos Islands, stakeholders gathered at a first of its kind for the DDME, Business Expo.  Director of the Department of Disaster Management and Emergencies, Dr. Virginia Clerveaux talked about the showcase.

“We had a Business Disaster Fair and we had several stakeholders.  We had Fortis out here, we had interHealth Canada, we had the Ministry of Health, we had the Ministry of Tourism, Flow, Digicel and of course DDME, Chamber of Commerce and EMS, they were also out here displaying their products and their plans about business continuity disaster management, engaging the public and helping to educate them, ensuring that if we’re impacted this year, that we would definitely be better prepared than we were in the past.”

Before, there was comment from Government leaders in the announcement of a recovery team for the Turks and Caicos islands which were walloped by killer storms, Irma and Maria in September 2017.  The nation at this time heard about shelters and other measures being taken in preparation for the next five months and what they potentially can deliver in the way of storms. 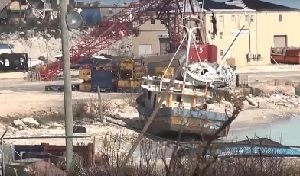 “While some of our shelters throughout the Turks and Caicos islands have been impacted, we have worked with stakeholders, with schools, churches and various institutions, and they have agreed to allow us to use their facilities as shelters.  I am happy to report that when we launch or when we name the list of shelters that we have, you will realize that we have sufficient for every island, and for the population that is deemed vulnerable and likely will evacuate.” said Dr. Clerveaux

Already the first named system – Alberto – has unleashed its wet fury over a part of the US which usually never sees hurricanes… well, except for Florida.  We were hearing Alabama, Tennessee, Ohio and the Great Lakes… really peculiar and evidence again of the unpredictability of these seasons.

Atlantic Hurricane Season is June 1 to November 30.  The NHC is advising residents to get a plan.