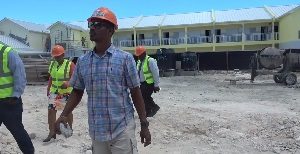 #TurksandCaicos, April 13, 2018 – Providenciales – Seven months after catastrophic hurricane Irma and the Turks and Caicos Minister of Education was touring schools in Providenciales, getting a direct report on the reconstruction. 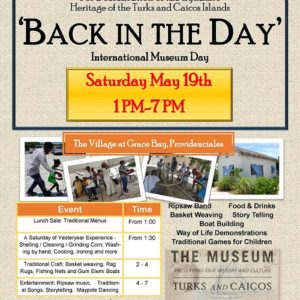 The tour started in Blue Hills where the largest government school Clement Howell High is with students in, but there are small construction zones marked out.  Hardest hit Oseta Jolly Primary school was not as fortunate; the school is a write off and the work required will be major – it seemed quiet on the day we dropped in with Education Minster, Karen Malcolm.

“There is no need for a complete demolition but there will be some demolition as you’re seeing there sections of the roof have been damaged, so we have to take off the roof and start from the bell beams so that we can reconstruct a proper bell beam along with hurricane straps for the new roof and so on.”  -Mark McAulay (Principal Architech Public Works TCI)

Onto Five Cays where the Enid Capron Primary school was making progress.  The Minister explained that readying the schools was not just about students, but prepping shelters as we near the start of another Atlantic Hurricane Season on June 1.

“Hurricane Maria and Irma really showed us that if we need to cater for a large population, we need more shelters and we can’t depend on the voluntary “let me use your building” kind of thing.” said Wesley Clerveaux, PS. Ministry of Education.

The cost to rebuild schools damaged in the September 2017 storms in the Turks and Caicos was put at $4.8m. 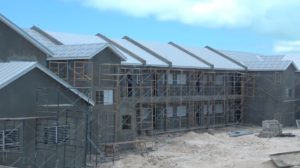