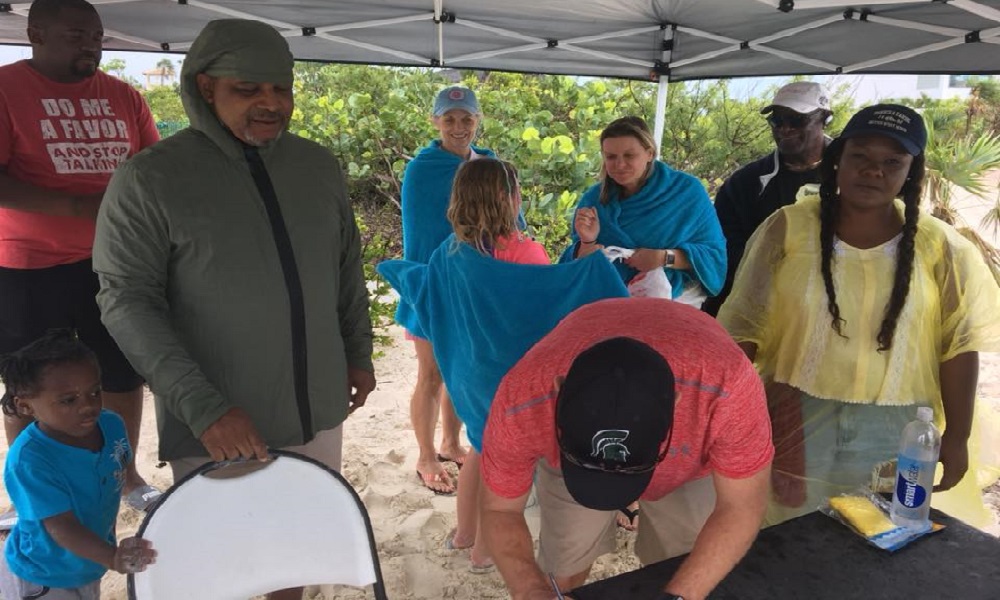 #TurksandCaicos, January 6, 2018 – Providenciales – There is concern being expressed about the call for a beach party protest on Taylor Bay Beach in retaliation to a resident of the area trying to throw locals off the beach.

At least three political leaders have called for discretion after a former premier has summoned those against the idea that Taylor Bay Beach is private to come out to a beach party today, January 6, which will be complete – according to the invite – with DJ music by a popular local jock.

In a media release overnight, Premier Sharlene Robinson weighed in on the matter.   There had been repeated calls for the country’s leader to speak out and on Friday night she did with a statement which outlined the land transactions and transitions of Taylor Bay Beach over the years, referenced the Planning Department’s recent denial of the property owners to legally erect a gate to prevent public access and addressed the planned party protest set for today.

“Once again, as already communicated by Hon Ralph Higgs, Minister with responsibility, we remind all persons seeking to enjoy Taylor Bay or any other beach, to do so in a dignified and respectful fashion and in a manner befitting our slogan, ‘beautiful by nature’.   Turks and Caicos Beaches are known as being the Best in the World, bar none, let’s keep it that way.”

A message issued a day following the confrontation on January 1 involving beach goers and a known and vociferous resident who claims anyone on the beach is trespassing.

Hours before the Premier’s statement, documents exposing an application which was denied by the Planning Department by the owner was leaked.   The document revealed that there was a request to erect a six foot chain link fence and six foot gate and that there was a denial of that request on six grounds as outlined by the Physical Planning Board.

The reasons cited by the Board were that the land is a public easement to the public Taylor Bay Beach; that the 11 foot wide easement has been used for 28 years as the public access to Taylor Bay Beach and is the only public access; that the applicant was after the fact requesting the permission because already erected was a six foot gate on the parcel of land in question; that the permission for the gate to be constructed after it was already put up on the land is a disrespect to the order of how things should be done and that any other development at the site would attract enforcement procedures and that if the development – ie the gate and fence – were to be approved, it would set a wrong precedent for future developments.

The applicant was also asked by the Board to remove the gate and the rubble blocking access.  The denial and order to correct the situation at Taylor Bay Beach was addressed by Planning since May 2017, yet the property owner persisted in blocking access without legal repercussions as promised by the Board.

It was said in that email that it was not expected that the Turks and Caicos Islands Police would get involved.

The issue has grabbed local and international attention and has spawned at least one original song, which sends the message that ‘in our country every beach is public, and the beach belong to we…”

So far, the Michael Misick led protest appears quiet.  Photographs shared by the former premier on his Facebook page show people on Taylor Bay Beach quietly signing a petition after accessing the beach through the gate, which was left open.