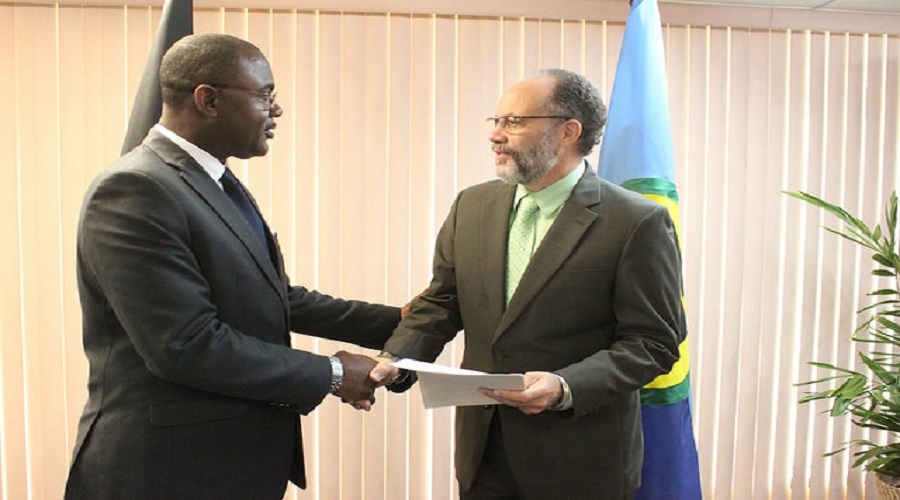 #Bahamas, December 13, 2017 – Nassau – The Bahamas on Monday underscored the importance of maintaining strong relations within CARICOM with the accreditation of a new Ambassador.  The Ceremony took place at the Headquarters of the CARICOM Secretariat in Georgetown, Guyana.

Secretary-General of the Caribbean Community, Ambassador Irwin LaRocque, in accepting the credentials of H.E. Reuben Rahming, noted that The Bahamas has been a valued member of CARICOM, promoting the Region’s interests in tourism, for which the Prime Minister has lead responsibility within the CARICOM Quasi-Cabinet.

With respect to The Bahamas’ leadership of the tourism sector, the Secretary-General said he looked forward to working with Mr. Rahming to advance the work of the Interim Tourism Working Group, whose establishment was mandated by CARICOM Heads of Government in recognition of the primary role of tourism in the regional economy.

The Working Group has completed significant work with regard to the identification of strategies aimed at stimulating tourism, and maximizing the employment, entrepreneurial and revenue potential it can bring to the Region, Secretary-General LaRocque stated.

Mr Rahming, in his new position, is now a Member of the CARICOM Committee of Ambassadors, and  in welcoming him the Secretary-General said his involvement will assist in keeping the Community’s institutions aligned with the goals and aspirations of the Strategic Plan.

“The Members of the Committee perform a critical role as the link between the national and regional agendas.   As part of its remit, it facilitates and drives the Change Process at the national level.   The Ambassadors also have the fundamental responsibility to identify challenges to the implementation of decisions taken by our various Organs and make recommendations to resolve them,” the Secretary-General noted.

He said the Region must enhance its resilience against the deleterious effects of climate change together.   “It is that spirit of togetherness that builds our Community and maintains our unity that is strengthened by the work of you and your colleague Ambassadors to CARICOM.”

The new Bahamian Ambassador said he has taken note of the many successes his country has experienced as it remained engaged in all organs and institutions of CARICOM, by collaborating with other Member-States, and through the co-ordination of the Region’s foreign policy.

He said that this past hurricane season which devastated Dominica, Barbuda and other parts of the Leeward Islands, The Bahamas, Cuba, Dominica, Guadeloupe, Turks and Caicos Islands, Puerto Rico, St. Martin (and St Maarten), and the British and US Virgin Islands, “underscored how vulnerable we are as a region and the importance of maintaining strong relations within CARICOM.”

He expressed sympathy to all of those affected by the storms and conveyed his best wishes for the quick recovery of the affected islands.   He also expressed appreciation to the Governments and peoples of CARICOM who assisted The Bahamas, in particular, following the passage of Hurricane Irma.

“I also take this opportunity once again to thank you and the Chair of the Conference, the Prime Minister of Grenada, for the solidarity and leadership you demonstrated in visiting the impacted countries, including The Bahamas, and in organising the recent Donor Conference at the United Nations that resulted in the commitment of some $2 billion of support,”  Ambassador Rahming added.

Residents question TCI Government ‘why no re-construction yet’, South Caicos still a mess after Hurricane Irma