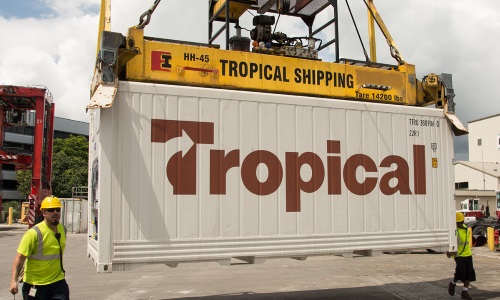 #PROVIDENCIALES, Turks and Caicos Islands – November 3, 2017 – Tropical Shipping is helping Caribbean residents by giving significant savings on shipping to the islands in the aftermath of a harrowing hurricane season, which actually still has 28 more days left officially.

A Providenciales resident last week reported on the tremendous break in shipping cost he received once he arrived at the Miami facility to send supplies back home as he rebuilds following damages wrought by Hurricane Irma.

A pallet, stacked up to nearly 5’ he estimated was a mere $75 to load for home to Provo.  Online, #TropicalShipping was keeping customers up to date with numerous reports on their services throughout the US and the Caribbean region in the face of a string of natural disasters.

One report said, “Tropical Shipping has temporarily reduced its 0-39 cube LCL rates as well as 55 gallon and 75 gallon barrel rates for relief items.  Special hurricane relief rates are in effect until November 30th.”

This means the rates end when the hurricane season does, and for Providenciales which is on the list as PLS, one to five cubic feet to ship is just $25, up to 39 cubic feet gets to no more than $75.