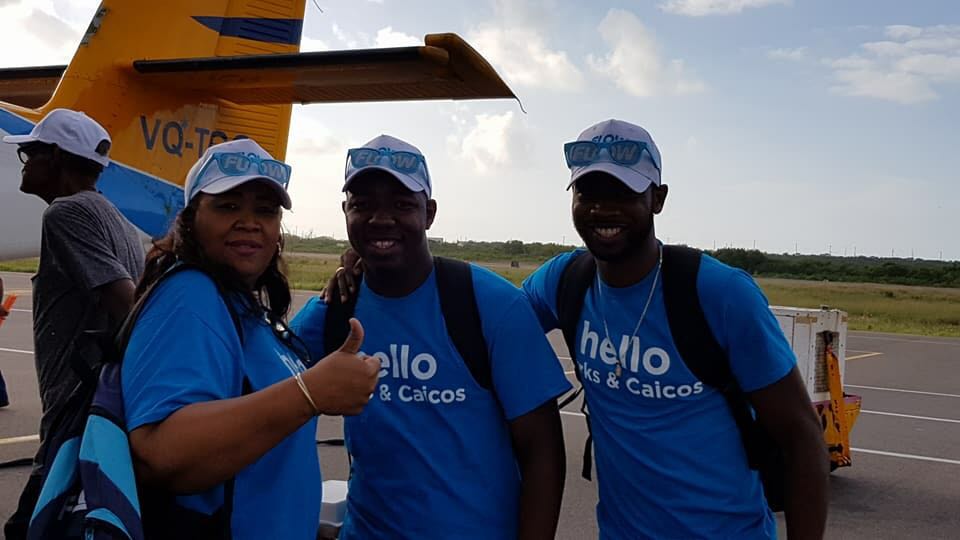 #TurksandCaicos, November 9, 2017 – Providenciales – On Tuesday, October 30th, Flow Turks and Caicos and partners traveled to the sister islands to distribute relief items for persons affected by the recent hurricanes and to say thank you to their customers for their loyal support.   Flow also welcomed the many new customers who have joined its world-class 4GLTE network as a result of its demonstrated resilience during the hurricanes.

Nearly 1,000 customers in Grand Turk, South Caicos, and North & Middle Caicos were treated to a hot cooked meal, ice cold refreshments courtesy of Sunny Foods, an assortment of fruits courtesy of Graceway IGA, and a variety of items from Flow.

Flow Country Manager, Delleriece Hall said that “Cable & Wireless has been in Turks and Caicos for over 120 years and we stand committed to continue serving the people for many more years.   We are grateful for our customers’ continued patronage and we thank them.   We are also extremely grateful to our partners, CIBC First Caribbean, Inter Caribbean Airways, Graceway IGA, and Sunny Foods Wholesale for the contributions made in kind to give back to these islands that were severely impacted by the passing of the recent hurricanes more so than other islands.”

“Graceway Supermarkets was pleased to partner with FLOW in to spend some time with residents of the Sister Islands. We hope we were able to bring some measure of relief and enjoyment in what has been a trying period for all.   Thank you for allowing us to be a small part of your day,” shared Ken Burns, Managing Director, Graceway Supermarkets.

Larry Lawrence, Country Manager, CIBC FirstCaribbean said, “CIBC FirstCaribbean stands by our colleagues and clients during this difficult time, and are committed to working closely with our corporate clients and communities to recover and rebuild.   The road to recovery in some of the hardest hit areas will be long, but we will help each other through it.”

Olympian and Flow/C&W regional ambassador Mr Delano Williams, who is from Grand Turk, was also part of the team.   Delano was delighted to share a message of hope and resilience with students and residents impacted by Hurricanes Irma and Maria.

“Kudos to the #1 network in the TCI for the tremendous work they have been doing to restore full services to residents in the TCI, and for keeping me connected to my family and friends before, during and after the storm,” said Williams.

Williams visited several hurricane impacted public schools with the team from Flow across the Sister Islands.   His message was to take a negative and turn it into a positive.   He reminded islanders to use the Hurricane to reposition and re-invent themselves.

Flow also unveiled its new Billboard messaging across the islands which echoes its sentiments of thanks and appreciation for its customers’ continued support.