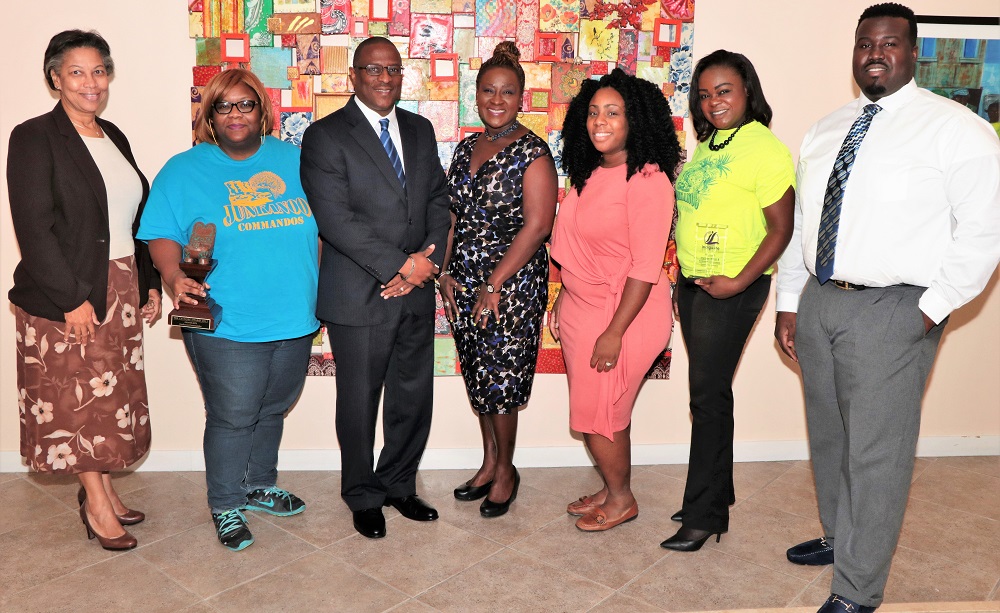 #Bahamas, November 3, 2017 – Nassau – Minister of Youth, Sports and Culture the Hon. Michael Pintard recently commended the Junkanoo Commandos for the work they have done in helping to promote and enhance the Bahamian cultural art form of Junkanoo and for the recognition and awards they accumulated while doing so.

“One of our goals is to assist Junkanooers in making sure that Junkanoo is a ongoing concern, that it is able to generate employment and income,” Minister Pintard said during a courtesy call with the award-winning group.   “In order to accomplish that, we need to work with organisations that are able to stage events, create places where Bahamians and visitors can enjoy a part of our culture – Junkanoo being the most popular expression of Bahamian culture – and we need organisations who are able to internatonalise aspects of our culture.

“The Junkanoo Commandos is one of the best possible examples of an organisation that is doing that.”

The Junkanoo Commandos is an organisation comprised of young Bahamian men and women from various New Providence Junkanoo groups, and its members have traveled nationally and internationally, showcasing the various expressions of Junkanoo and Bahamian culture for at least a decade.

CEO and Founder Angelique McKay said that one of the many things that makes her proud of the Junkanoo Commandos is that its members destroy the myth of the “tribalism” amongst the various Junkanoo groups.

“That myth is dispelled by the cohesion in our organisation because are made up of members from Valley Boys, Saxons, Roots, One Family and Genesis; and you do not tend to see the tribalism that people in the general population speaks about,” Ms. McKay said.   “Everyone moves as one unit to showcase Junkanoo, with one common goal; so I’m proud of the fact that they are in the position to dispel that myth that Junkanoo has become totally ‘tribal’ amongst the groups.”

Ms. McKay pointed out that she wanted to put the Junkanoo Commandos forth for consideration as “cultural ambassadors for The Bahamas – when it comes to cultural exchange programmes because it was something that the organisation had been doing for years.   She wanted to familiarise Minister Pintard with what the Junkanoo Commandos has done in terms of teaching the creative arts of Junkanoo, highlighting Junkanoo as a cultural expression of the people of The Bahamas.

Locally, the Junkanoo Commandos organisation has conducted national workshops throughout The Bahamas, since 2007, designed and built lead costumes for stage plays produced by Shakespeare in Paradise, introduced and judged the off-the-shoulder category in Junior Junkanoo, raised funds for various relief efforts, appeared in music videos and even donated 500 books to Stephen Dillet Primary School when the school won the primary school Junior Junkanoo Division.

Internationally, the Junkanoo Commandos lists in its accomplishments the honour of conducting Junkanoo workshops on the Isle of Wight, UK; performing at the Grand Opening of The Carnival Learning Centre there, as well as being included as part of the first-ever Junkanoo Backline National Tour of the United Kingdom, in 2008.   From there, they conducted workshops and performed in festivals throughout the United States, the United Kingdom and Europe – including the Edinburgh Jazz Festival, the Nice (France) Carnival, the Broughhaha Festival in Liverpool, and the Virginia Carib Fest.

One of the highlights of the Junkanoo Commandos history was performing on the steps of the Lincoln Memorial in Washington, D.C., for the 50th Anniversary Celebrations of the “I Have A Dream” Speech by Dr. Martin Luther King, Jr.

“The fact that the Junkanoo Commandos was the only international act that performed at that venue, at that historic event – in the presence of three U.S.   Presidents and we performed immediately after the (then) Prime Minister of Commonwealth of The Bahamas spoke; and the fact that that was the widest broadcast, to date of Junkanoo globally – I would say that that is the proudest moment that we would have had,” Ms. McKay said.   “We were actually a part of history and with the importance of what Dr. Martin Luther King, Jr., did, it makes us even prouder to have been an instrumental part in the 50th Anniversary.

Among the accolades and awards that the Junkanoo Commandos have attained, two of particular note were received this year – the U.S.-based International IndigoLife Black Life Treasure Award and, closer to home, the Cacique Award in the Creative Arts from the Ministry of Tourism.

“The Cacique Awards recognises the best in our preeminent industries, and for them to have achieved that is an outstanding accomplishment and is a testimony to the power of Junkanoo and the discipline and teamwork of the Commandos,” Minister Pintard said.

Ms. McKay said that she wanted Minister Pintard to see that the Junkanoo Commandos takes the creative arts very seriously, in that they had created a business from it, and its members move as artists.

“We are self-sustaining,” Ms. McKay pointed out. “We have created our line of products that we generate revenue from for the organisation, and (utilise) the best practices for a cultural entity, taking advantage of the fact that the ‘orange economy’ is growing.

“We are an example of the success of Junkanoo, being able to be exported as a creative art.”

“We are proud of the work that they are are doing,” Minister Pintard said. “We are honoured to be partnering with them and we encourage other groups to look at this successful programme, and model themselves after them or adopt portions of their programme.”