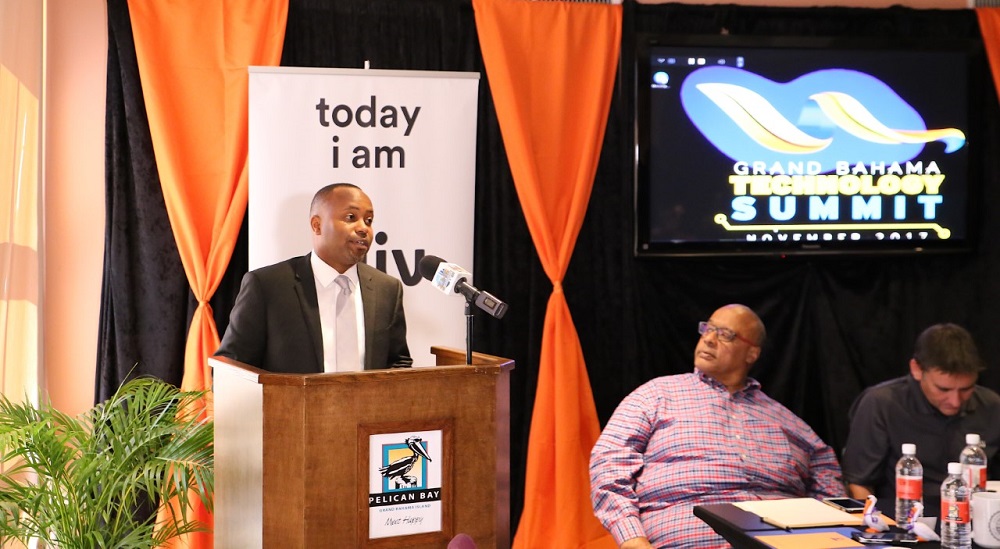 #Bahamas, October 17, 2017 – Grand Bahama – Minister of State for Grand Bahama in the Office of the Prime Minister, Senator Kwasi Thompson says the concept of The Bahamas as a Technology Hub is not a new idea, however making Grand Bahama the center of that technology hub just makes sense.

The Minister’s remarks came during a press conference at Pelican Bay resort on Monday, October 16, 2017 to announce a Technology Conference in Grand Bahama November 9-10, 2017 at the Grand Lucayan.

“The technology industry can become a third pillar of our economy,” said Minister Thompson.   “And that can begin right here in Grand Bahama.   For years, we in Grand Bahama have been searching for industries which can diversify our economy and today is a very important step in that process.”

The Minister of State for Grand Bahama noted that the information and communication technology industry has also caught the eye of other Caribbean countries.   He referenced an article in Caribbean Journal that stated “the culmination of the Caribbean and technology is really ideal” and it ranked The Bahamas as one of 13 top locations for potential Tech Hubs.

“The Bahamas is really well positioned by our proximity to the United States,” Minister Thompson pointed out.   “We have the infrastructure through our fiber optic cable.   We also have the skilled Bahamians – some at home and some abroad to make it all possible.

“I believe we are really the most in need of economic reform, as tourism is not enough.   We therefore should be willing to make the necessary changes and modifications to make this a reality.”

In giving credence to his call for Grand Bahama to become the Tech Hub for the entire Bahamas, Minister Thompson pointed out the fact that Grand Bahama is located closer to the United States than Nassau – has better infrastructure than most of the other islands, and access to acres of cheap, available land.

“We are also well-positioned with the Grand Bahama Shipyard and the Freeport Container Port,” added Minister Thompson.   “Both of these facilities are leaders in the region, and even in the world…, and can facilitate technology subsidiary businesses.   Technology manufacturing businesses can take advantage of concessions we already have in the Hawksbill Creek Agreement.

“So Grand Bahama is ready for a shift in industry focus, and technology is the natural evolution from our industrial nature.   We need an economic system upgrade.”

He continued, “It will require a focused plan, the support of local stakeholders, community involvement and a government with the will to make it happen.

“We will require changes in our legislation, special tax incentives, business license exemptions and even concessions that will attract data centers and major technology manufacturers.   We need to have important conversations on internet exchange points to be able to attract and protect company data.

“We must create an environment with local entrepreneurs and innovators, where they can flourish alongside companies from abroad.

ANNOUNCING SUMMIT – Minister of State for Grand Bahama in the Office of the Prime Minister, Senator Kwasi Thompson was the keynote speaker during a press conference at Pelican Bay resort, October 16, 2017, to announce dates and plans for the upcoming Technology Summit, to be held in Grand Bahama November 9-10, 2017.  (BIS Photo/Andrew Miller)