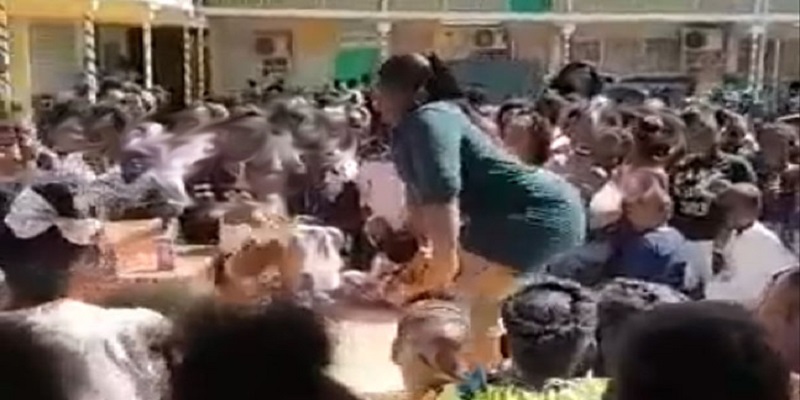 #Bahamas, October 25, 2017 – Nassau – It is not the first time dirty dancing has taken place on a public school campus, but in the era where everyone with a cell phone is not only a camera person but a news reporter – the lewd dancing is making headlines in The Bahamas and the world can see it.    The session unravels on a stage in the general area of a government high school, on what appears to be dress up day.

A DJ is leading the dancing which is first demonstrated by who appears to be an older woman, then followed up by teenage girls who mount the stage from among the throngs of students looking on.    The crowd of students cheer as all of the females take turns in gyrating their hips; the faster the motion, the louder the cheers.

The Ministry of Education is concerned about the filming and the incident and at 4:30pm issued a statement to say they are investigating.   The succinct statement says:  “The Ministry of Education is aware of a video circulating on social media in which it appears that students are dancing inappropriately, on a public school campus.   We await the findings of an internal investigation to determine what future course of action will be taken.”

The school is not named by the Ministry, but on social media – H.O. Nash in Stapledon Gardens, Nassau is fingered for the vexing display.   Within three hours, the video was shared 76 times and seen over 7,700 times.   Comments on the video posted to Bahamas News range from its no big deal because it was the students’ funday, to references to Bahamas Junkanoo Carnival which promoted gyrating in the streets of Nassau to this one, “Dj’s have been to school Fun Days for decades.  From primary school straight to high school.  This is nothing new why are we continuing to act like it is?!? Nothing that is taking place in no way is new, the only thing that is new is now videos have access to social media for everyone to view.”