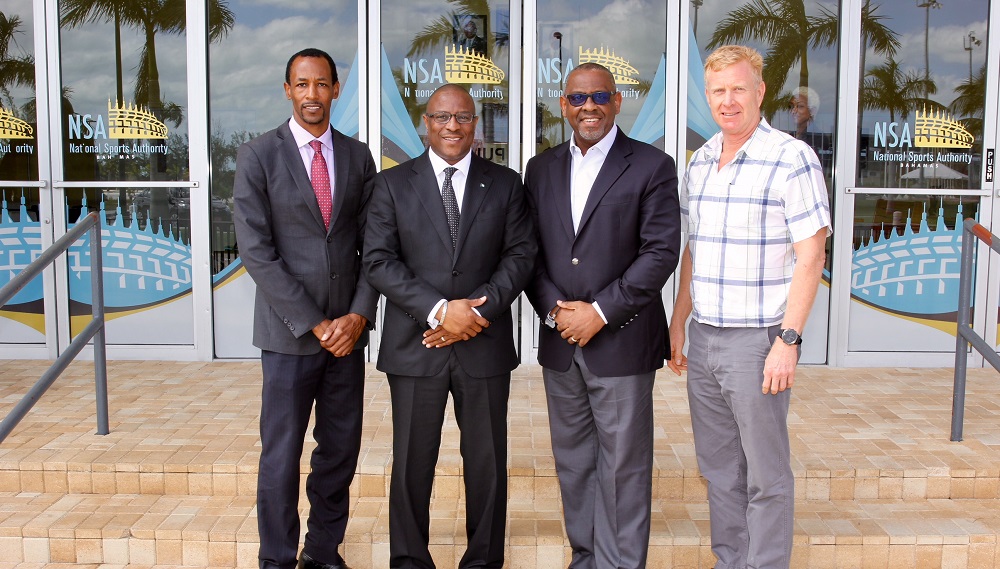 #Bahamas, October 31, 2017 – Nassau – Minister of Youth, Sports and Culture the Hon. Michael Pintard in a press conference, Monday, October 30, 2017 thanked those who have helped to develop the Elite Athlete Subvention Programme on behalf of the Ministry.  He also saluted those who have benefited from it over the years.   The Minister especially thanked those who are now a part of the newly-formed panel that is tasked with revising the programme.

Minister Pintard stated, at the Kendal G. L. Isaacs Gymnasium: “during the various courtesy calls with various federations and associations, the Ministry promised to work with them in revamping the subvention programme which has been a source of concern for many federations and athletes throughout the country.

“Today we are here to announce the committee that has been assembled, who are already engaged in the work of revamping the subvention system.”

This process is expected to take approximately six weeks.

Director of Sports Tim Munnings pointed out that the Elite Athlete Subvention Scheme was created in 1996, primarily to assist with athletes returning to The Bahamas to compete.  At that time, he said, only about six athletes benefited.

“Today, over 60 athletes are currently enrolled in the programme, benefiting from direct government financial assistance toward their competition and training expenses,” Mr. Munnings said.   “The Government of The Bahamas is pleased that the programme has contributed to the podium success of many of the participating athletes; and we feel that through the improved management of the programme, we are confident that we will celebrate even more success of our athletes.”

Mr. Munnings noted that the panel assembled to review the programme was made up of former athletes and professional administrators capable of providing an objective analysis and recommendations for the future. The work of the committee will be done in consultation with federations, athletes and other stakeholders.

“I want to make it perfectly clear: The Government of the Commonwealth of The Bahamas – having seen the exponential growth in sports in the country and the successes we have been experiencing across various sporting disciplines – is not in a position to provide what ideally we would love to provide by way of funding for all of the elite athletes in the country, however we are committed to doing our part,” Minister Pintard stated.

“Furthermore, let me say that the purpose of sports in The Bahamas – and certainly under this Administration – is to not only develop elite athletes,” he added.   “We have other objectives, as well.”

Minister Pintard said that one of those objectives is to use sports as a “national development tool” to promote healthy living among Bahamians.   An active lifestyle helps us in the fight against obesity and other non-communicable diseases.

Secondly, Minister Pintard noted that the Government believes that education is “absolutely” important and sports play a key role in assisting many Bahamians who would have otherwise not been able to afford tertiary education by way of scholarships.

He added that the Government believes that sports can generate employment and be a source of revenue for many Bahamian professionals.

“We ask all of our elite athletes to continue to do well in your respective disciplines; and demonstrate your commitment to The Bahamas.”

He noted that it is not uncommon for many larger countries around the globe seek to lure elite athletes from other countries by offering forms of inducements.

“In our case, we encourage you to remain focused, loyal, and nationalistic with respect to your country and we will do our part, within our financial capacity, to assist in your continued development,” Minister Pintard said.