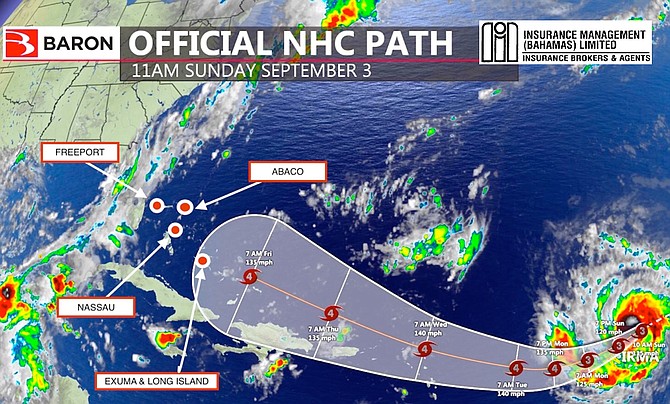 Bahamas, September 3rd 2017 – Nassau – Jeff Simmons of the Department of Meteorology announced that South East Bahamas and Turks and Caicos will begin to experience the strong effects of Hurricane Irma, a category 3 hurricane by Thursday afternoon into Friday morning.

As such Prime Minister Minnis advised on “gathering supplies such as water, food, medicine, gasoline, flashlights, radios, batteries, and any other necessary supplies.” This was announced at today’s National Emergency Management Agency’s (NEMA) press conference.

While officially addressing the public, Prime Minister Minnis also announced that beginning tomorrow, Tuesday 5th September, NEMA will test launch a national alert system for emergency preparedness including hurricanes. Bahamians and residents can expect a first alert from the Department of Meteorology on Tuesday, followed by a 48-hour alert on Wednesday and a 36-hour warning on Thursday.

Minnis also added, “the government is acting with an abundance of caution” while advising, “the best course of action is to be well prepared in advance.”

At present, Hurricane Irma is located 565miles east of Leeward Islands moving Southwest of the region. NEMA continues to emphasize the importance of preparedness and strongly recommend that all members of the public take these warnings very seriously as Hurricane Irma is reflecting similar patterns to that of Hurricane Matthew which tore through the Bahamas in 2016.