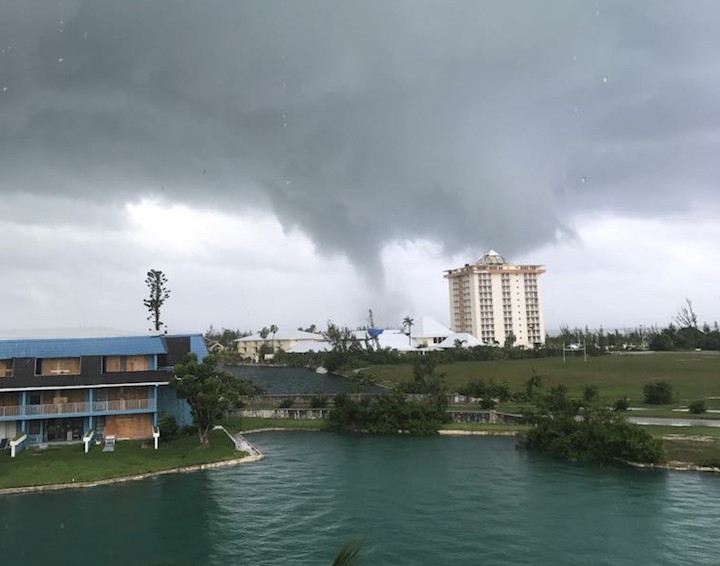 #Bahamas, September 11, 2017 – A direct hit by super typhoon, Hurricane Irma was averted, yet the damages in the Turks and Caicos and The Bahamas Islands are significant.   Grand Bahama and Bimini remain under Tropical Storm warning due to Category 3 hurricane Irma, which has left the region but is still causing so much devastation as she departs the northern Bahamas.

Twenty eight homes were damaged in a freakish tornado spree across Freeport on Sunday according to officials there.   Two of those homes were completely destroyed by the twisters spawned in the tropical storm force conditions and early assessments reveal that as many as 78 people were affected.

Bimini had one tornado touchdown, in Bunker’s Hill where several apartment buildings were with roof damage, at least one power pole was down and people had to be evacuated to safety.

In Freeport, one man was sucked up into a tornado while driving in his car along East Atlantic Drive; the vehicle was dropped to the ground, upside down and the man managed to escape with minor injuries; onlookers say he ran from the scene and never looked back.

Kirk James, with the Bahamas Department of Meteorology had forewarned residents that tornadic activity is associated with the tropical storm conditions, so the multiple twisters should have been no surprise to residents who hoped Hurricane Irma was be a non event for the storm wearied islands.

The Rapid Assessment Team set out since 6am in Grand Bahama, it includes the ministry of works, police, social services, environmental health, defense force and NEMA.  Grand Bahama island, which lost power around 10pm Sunday, is expected to be given an all clear around noon today.

Although school in Grand Bahama and Bimini are still closed until further notice, the Ministry of Education on Sunday advised that teachers at other schools across the country are to return to school today; students are due back on Tuesday September 12.    Hurricane Irma forced evacuations and closures of schools and businesses since Thursday.

Though the storm veered off and missed a direct hit of the island chain, Irma still brought dangerous conditions and caused power outages and tornadoes.   The University of The Bahamas says its San Salvador and Oakes Field campuses sustained no damage and reopen for classes today.