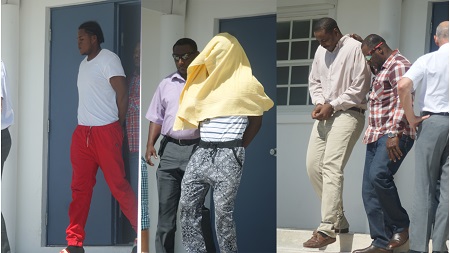 #TurksandCaicos, August 15, 2017 – Providenciales –  After a significant bail reduction for Lamar Griffiths and Conrad Thomas, they were able to make bail and are now released from remand at the prison and are resident outside of Grand Turk as a part of their bail conditions.    The two men are charged with the 2015 murder of #KevinoSmith in Grand Turk.

Bail, at $15,000 was set a few months back for the men who appeared in court in March, with an additional surety of $10,000.    Unable to meet the court demand, the duo applied for a variation and it was granted.

Magnetic Media is informed that Griffiths made bail at a mere $6,000 with a $10,000 surety; while Thomas made bail at a mere $3,000, also with a $10,000 surety.    It was also a startling development to learn that Levana Griffiths, the wife of Lamar Griffiths was released after her attorney, Lara Maroof-Misick proved the evidence linking the 28 year old woman to the heinous homicide was lacking.    Two other women were previously held in the case and were also let go.

Twenty-five year old Bah Smith was found, dismembered and buried in Breezy Brae, Grand Turk in April 2015 after being reported missing by his family in March.   As for the two remaining suspects, they flew out of Grand Turk since August, 4, 2017, according to reports.