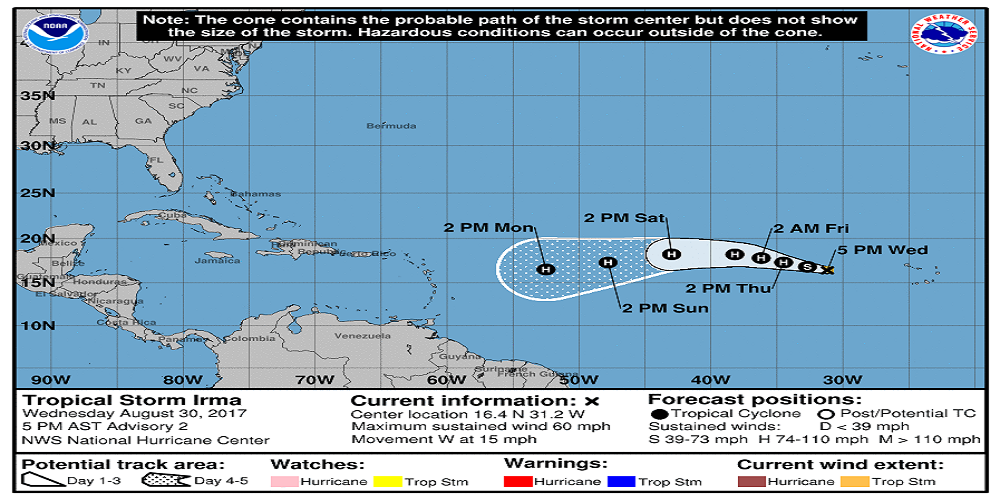 #TurksandCaicos, August 31, 2017 – Providenciales – We are not experiencing a hurricane, but there is a tropical wave over the Turks and Caicos Islands and it is expected to bring rain and thunderstorms for the weekend.   Here is the official report from The Bahamas Department of Meteorology;

A TROPICAL WAVE IN THE VICINITY OF THE SOUTHEAST BAHAMAS CONTINUES TO MOVE WESTWARD WHILE A WEAK HIGH-PRESSURE RIDGE SETTLES NORTH OF THE AREA. SMALL CRAFT CAUTION IS IN EFFECT.    BOATERS SHOULD EXPECT GUSTY WINDS AND HIGHER SEAS IN OR NEAR HEAVY SHOWERS OR THUNDERSTORMS.    WINDS AT 15 TO 20 KNOTS OVER OPEN WATERS.  SEAS:  4 TO 6 FEET OVER THE OCEAN.    Weather wise today, a FEW ISOLATED SHOWERS AND THE CHANCE OF AFTERNOON  THUNDERSTORMS.    The Met Office also warns, that MARINERS SHOULD CONTINUE TO BE ALERT FOR THE POTENTIAL OF WATERSPOUTS.

As we watch the Tropics, here is the latest on #TropicalStormIrma which is expected to become a hurricane today…At 5AM the center of Tropical Storm Irma was located near latitude 16.5 North, longitude 32.9 West.    Irma is moving toward the west near 12 mph.   A west-northwestward motion is expected today and tonight, followed by a generally westward motion on Friday.

Maximum sustained winds have increased to near 70 mph with higher gusts.     Additional strengthening is forecast.   Tropical-storm-force winds extend outward up to 60 miles from the center.    There are no warnings or watches and no hazards to any land mass at this point.    Tropical Storm Irma is located about 590mls west of Cabo Verde Islands and is moving west at 12mph.