#Bahamas, August 22, 2017 – Nassau – The unrelenting surge in violent crimes in The Bahamas led to an urgent meeting being called and the National Security Minister announcing the establishment of new initiatives which he hopes will not only give communities a stake in their safety but end the increase in murders. 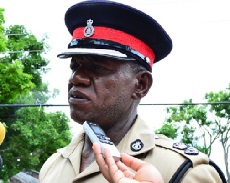 On Friday alone, three murders were recorded – one on Hospital Lane, another in Fox Hill and a third on Kemp Road.    Minister Dames said the new arm will empower citizens to assist with patrols on foot and in vehicles and he told the country in a media debriefing after that meeting, that there will be a structural review.

Police do not know how much manpower they need per division, and the review will find that out and a pilot of his new structure will be run, said Dames to determine its effectiveness.    Getting intel on and reports of major crimes faster is another goal of the new Minister, he said a dismantled measure will be reinstated.

The #CentralDetectiveUnit will be decentralized to give residents swifter response, a measure stopped under the PLP, Minister Dames said.    There was also a promise that known drug houses will be shut down, that firearms trafficking will be disrupted and even the gangs themselves will be a focus as Police become more assertive.    The new National Crime Prevention and Neighborhood Watch Council of the Royal Bahamas Police will be headed, for now, by Senior ACP, Stephen Dean.